No additional setup is required:

Obama: "A New Vision Of An America In Which Prosperity Is Shared" 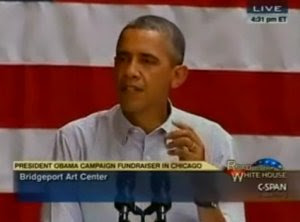 "Too many folks still don't have a sense that tomorrow will be better than today. And so, the question in this election is which way do we go?" President Obama asked at a fundraiser in Chicago on Sunday.

"Do we go forward towards a new vision of an America in which prosperity is shared?" Obama asked. "Or do we go backward to the same policies that got us in the mess in the first place?"

"Shared prosperity" is collectivism. Statism. Marxism. It means taking from those who produce goods and services to fund those who don't, which is certainly outside any legitimate function of government under the United States Constitution.

I wouldn't be all that concerned except... collectivism has failed every time it's ever been tried in all of human history, from Plato's Republic to the Soviet Union. It leads to despotism and tyranny, as surely as night follows day.

"Obama IS a Marxist. That is simply a fact of understanding what words mean."

Man, you must really hate having black people in the WHite House to come up with crap like that. Obviously anyone who calls Obama a Marxist is a racist retard that only listens to people Misinterption of the word "Marxist" The racist right throws it around like how black people use the N-Word!

Obama is no more a Marxist Mr. D'Souza than any elite. Marxism, which Mr. Obama was noted as being one in his Bolshevik orbit years ago, until Mark Levin finally got brave enough to define him as that, is simply the best form of slavery to plunder the world and control the mob.
If there could be a better form of control at a cheaper method which would not stampede the mob into revolution the cartel would embrace it, and that is what Obama would be.

Yeah. So, here's the thing. You've proven your stupidity by taking the "You didn't build that" quote out of context, which means you're simply a kool-aid drinking clown who doesn't have the intelligence to recognize when his own interests are being threatened.

1. Obama is not a Marxist. Marxists believe that workers should have DIRECT ownership of businesses such as factories.

2. No, Obama is not a Communist. He is supported by huge corporations, the opposite of communism.

3. A Muslim? No, he doesn't follow the pillars of Islam. He's never made the Hajj, said the Shada, he eats during Ramadan, he eats pork, he does not pray five times a day, he does not pray in Muslim fashion, he confesses to be a Christian (which in Islam, makes you not a Muslim), nor does he go to a Mosque. Showing respect to a non-white, non-christian culture DOESN'T make you a memeber.

How does activating my rights as an American Make me a traitor?No, having a difficult political view from you makes this a democracy, you disgusting Piece of shit!

That depends. Does 'Marxist' mean, 'a black guy that conservatives don't like because he is black and has more power than them'? Because if it does, then he must be.

Obama does not hate America, he wants to change it.

Calling the POTUS a POS and a fraud seems to the the usual calling call for you right-wing racists and bigots like you!

The point I’m trying to make is that you hypcortical racists are in NO position to be calling Barack Obama a liar of any kind, when for the last three years he has faced constant, unrelenting, mean-spirited, dishonest criticism since before he took office and every day since. His patriotism has been questioned by every member of the right wing echo chamber especially FoxNews and Rush Limbaugh, every single day he has served. He has been called a socialist, communist, Nazi, Marxist, traitor, foreign, un-American, liar, magic negro, halfrican and worse. He has suffered innumerable lies about his ideology, religion, family and even his place of birth. No other president in the history of this country has faced such unfounded open hostility and disrespect. No other president has ever been called a liar by a member of congress during a State of the Union, no other president has had to show his birth certificate…repeatedly.

You must be new around here, drone.

Compare and Contrast: Karl Marx' 10 Point Program of Communism and the Obama-Pelosi-Reid Agenda.

To anonymous:We would be reasonably happy to have any one of a number of black persons in the White House-Thomas Sowell, Allen West, Allen Keys, Walter Williams...
Bear in mind that we also don't like Joe Biden, Nancy Pelosi, Harry Reid, Debbie Wasserman, or for that matter, you.

Notice how Obama is now trying to appropriate the word "prosperity"?

They say "imitation is the sincerest form of flattery." Nothing about Barack Obama is sincere -- but he knows that the American people like what they hear when Paul Ryan speaks! Obama thinks the American people are so stupid that all he has to do is throw Ryan's favorite word randomly into his own speeches and that'll bring us back into his fold. Idiot.

I would strongly caution Anonymous to resist the urge to call ANYONE a "Kool-Aid drinking clown". He/she (?) has masterfully staked that territory for his/her very own. If this is how you think and what you really believe, I fear you will always be a defensive, devisive fool with no ability for critical thought and therefore no ability to comprehend the truth around him/her. Good luck. I truly hope you snap out of your stupor.