Not that you'll have any of these dots connected for you by vintage media -- they have an idiotic rape statement to hype -- but there happens to be a far more important story brewing in the Middle East. Yes, that's right, The Arab Spring™ is now spreading from Syria to neighboring countries and beyond like a deadly wildfire. 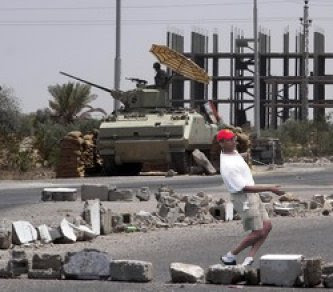 • UN military observers abandoned Syria as fighting intensified in several key cities. As many as 20,000 have been killed in the conflict thus far; the Assad Regime also admitted it "maintains a large stockpile of chemical weapons".

• Clashes in Tripoli "is a clear sign that Lebanon has been pulled further into the orbit of violence from the Syrian crisis" as at least five have been killed and 40 wounded in clashes between pro- and anti-Assad forces.

• About 2,500 Syrians have fled to Turkey in the last 24 hours, joining tens of thousands of others who sought refuge from the violence. In addition, a car bomb killed eight in southeast Turkey.

• In a clear violation of the Camp David Accords, Egypt's new Islamofascist government is moving heavy weapons into the Sinai Desert, another worrying sign for Israelis already concerned with Iran's growing nuclear and ballistic missile capabilities.

Which is more important: some guy in Missouri saying something idiotic or the Syrian conflict spreading to neighboring countries?

And isn't it just a bit hypocritical that a convicted, impeached pervert -- who actually admitted to molesting an intern and was accused of rape or molestation by Paula Jones, Kathleen Willey and Juanita Brodderick (to name but a few) -- is an honoree and keynote speaker at the Democrat National Convention?