Misunderstanderers of Islam Behead 17 Afghan Civilians at a Party

It's ABC News reporting, so it's gotta be true:

Taliban Behead 17 for Singing and Dancing 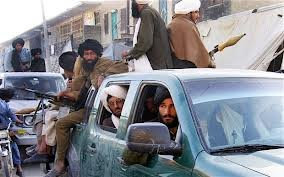 The Taliban beheaded 17 people, including two women, for attending a mixed-gender party where there was music and dancing, Afghan officials reported today.

The decapitated bodies were abandoned at a roadside in southern Afghanistan, according to Mullah Sharafuddin, the governor of Kajaki district in Helmand province.

All 17 bodies, including those of two women, were decapitated, but it was not clear if they had been shot first.

I blame Militant Quakers. And Bush.

It was just a misunderstanding. They thought they wanted a haircut.