You and I know it as math. Monty Pelerin, writing at American Thinker, offers some sobering factoids that highlight how desperate a fiscal situation the United States is in.

• "The official federal debt is $16 trillion. This debt represents 100% of current GDP."

• "The U.S. has passed [the Rogoff and Reinhart*] danger point, and recent U.S. GDP experience conforms to their findings." 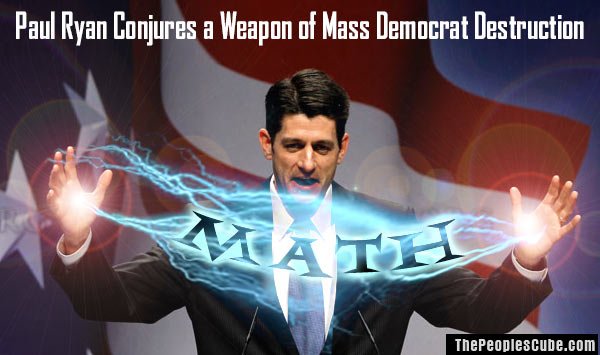 • "In addition to the debt of $16 trillion, the Treasury has explicitly guaranteed the debts of certain government agencies [including] Fannie Mae, Freddie Mac, ...[the] Postal Service, Amtrak, the Federal Deposit Insurance Corporation, the Pension Benefit Guaranty Corporation... [and] These shortfalls are likely to be funded by the federal government, although none of these exposures is recognized as federal government debt or obligations."

• "The unfunded liabilities of the federal government are enormous, dwarfing everything else. They arise from promises made to citizens, primarily with respect to Social Security and Medicare. Government maintains that it has no legal liability to honor these promises and hence does not recognize them as debt... Estimates of the present value of these obligations range from $50 trillion to over $200 trillion... This estimate is [as high as] 14 times what government reports as debt ($16 trillion)."

And, most importantly, the "U.S. government has promised its citizens almost four times the entire net worth of the nation."

This is why America's Tea Party movement is so important. If this country can be saved -- and that's a big if -- it is fiscal, Constitutional conservatism that will save it.

Democrats (and RINOs, to a lesser extent) have spent this country into oblivion. The New Deal, the Fair Deal, the Square Deal, the Great Society, Obamacare: all Utopian, Statist plans that could never work and have never worked in all of human history.

We have a choice to make in November: try to save this Republic, or let it collapse in the manner the Cloward-Piven Democrats seek.


* Authors of This Time Is Different: Eight Centuries of Financial Folly