Say, do you remember when we didn't need Keystone XL because we were awash in crude oil?

News out this afternoon is that Obama is looking into opening the Strategic Petroleum Reserve as a means to relieve pressure at the gas pump.  Someone at the White House woke up and realized that the welcome springtime fall in gasoline prices has reversed course and retraced its steps, as shown [below].  I can tell you that out here on the Left Coast, the price of premium gasoline has reached $4.99 a gallon at my nearest station, but then California deserves it.  (The recent refinery fire at Richmond, which will reduce capacity for a few weeks, clearly doesn’t help.)

But this isn’t the only chart that should be giving night sweats to Team Obama right now.  We and others have pointed repeatedly to the infamous “Stimulus” chart, to which we add today’s news... 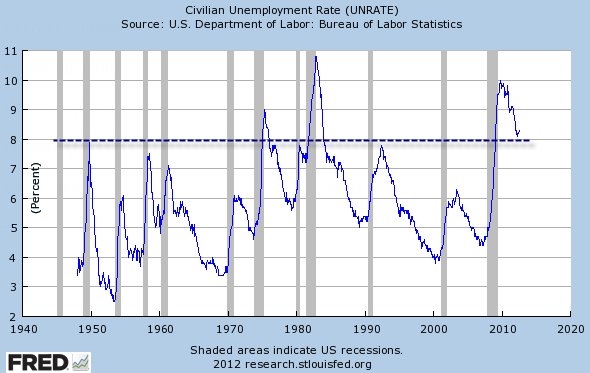 ...that the unemployment rate rose in 44 of the 50 states last month.

Why is the United States the only country on Earth that restricts access to its own vast reserves of energy?

I'll give you a hint: it starts with the letter D and ends with the letters e-m-o-c-r-a-t-s. Which is why these kooks need to be voted out in November. At every level of government, including -- but not limited to -- dog-catcher.

how about those ethanol mandates ?

tell the EPA to lay off and we can afford gas AND food...

"Say, do you remember when we didn't need Keystone XL because we were awash in crude oil?"

1. It appears you don't understand what the XL pipeline would do. Hint: The oil wouldn't end up in US pumps.

2. The fact there are substantial reserves to consider releasing would seem to bear out the second part of your headline.

Oil and gas are fungible, retard. It doesn't matter whether we refine the Canadian oil here or ship it abroad, because a higher supply will stabilize or decrease the price of oil in world markets. I suspect that you know that, but you can't resist the opportunity to trumpet your partisan, filthy ideology.

We keep reserves for military strategic reasons, not as a political tool to be used when your master Ozero needs a boost in the polls. You filthy progtards are hopelessly attached to your own ignorance.