Politics: The danger of foreign influence-buying through foreign donations to the Clinton Foundation is seen in millions of dollars of donations from Issam Fares, a Lebanese politician and billionaire enemy of Israel. 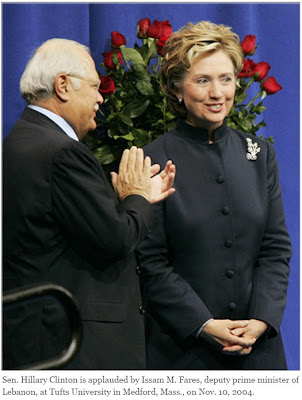 In the case of Hillary Clinton, the adage that the past is prologue is both a truism and a warning of possible things to come.

Just as Johnny Chung famously compared the first Clinton White House to a subway turnstile in which you put money to gain access, the Clinton Foundation is looking to be that turnstile on steroids, with dangerous implications for both American and Israeli security.

One of the contributors to the Clinton Foundation, according to an analysis of known donors by Joseph Schoffstall of the Washington Free Beacon, is Issam Fares, a Lebanese billionaire and philanthropist who has donated between $1 million and $5 million.

Some would question the sincerity of his philanthropy, since he is very selective about which of his fellow human beings he wishes to benefit and which he wants to see wiped off the face of the earth.

His connections to the Iranian terrorist sock-puppet Hezbollah and his animus towards our ally Israel speak volumes about his true intentions.

Fares was deputy prime minister of Lebanon and part of the pro-Syrian government of Prime Minister Omar Karami from 2001 to 2005. He was also a close associate of Maj. Gen. Ghazi Kanaan of Syrian intelligence during the time the Syrian army occupied Lebanon.

Two weeks after the assassination of former Prime Minister Rafic Hariri on Feb. 14, 2005, the Karami government resigned. Hariri's assassination at the hands of Syrian supporters and operatives inspired the Cedar Revolution, spontaneous protests that forced the withdrawal of Syrian forces and led to a brief period of calm before Hezbollah rushed in to fill the void left by Syria.

Fares is a longtime friend and supporter of Hezbollah, which before Sept. 11, 2001, had been responsible for more American deaths than any terrorist group on the planet. Hezbollah was responsible for the bombing in Beirut on Oct. 24, 1983, which killed 220 U.S. Marines and 21 other service personnel.

Fares has denied any Hezbollah connection to that event and calls Hezbollah the "National Resistance Movement" to Israel and "a resistance party fighting the Israeli occupation" of Arab lands.

To be fair, Fares has used his business and "philanthropy" to gain influence on both sides of the aisle, but one gets the impression that he is not about to curry favor with any of the pro-Israel 2016 GOP candidates anytime soon, having been busy donating to the Clinton Foundation.

The Fares family is a player in the U.S. oil services industry, with its main business holding being the Wedge Group, once headed by Bill White, who was President Bill Clinton's deputy secretary of energy and who would later go on to be mayor of Houston.

"Arab-Americans must substantially increase contributions to political candidates," Fares' son Najid wrote in a 1996 op-ed in the Detroit News. "Even modest contributions help ensure that members of Congress and their staffs take phone calls and are more responsive to their requests."

So too, presumably, are seven-figure donations to foundations headed by a former president and a former secretary of state who wants to be the next president.

Some were surprised when Hillary Clinton took time from her email scandal obfuscation at the United Nations to condemn the U.S. senators who consider President Obama's proposed deal with Iran on its enrichment program a nuclear Munich.

Considering her cozy relationship with Issam Fares, a staunch enemy of Israel and supporter of Hezbollah, maybe they shouldn't be.