Historian Daniel Pipes offers a concise and damning review of "The Obama Doctrine", such as its, beginning with a review of the administration's foreign policy track record. 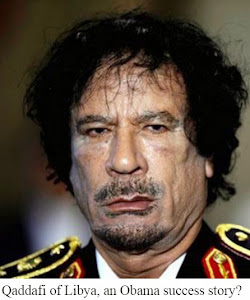 Count the mistakes: Helping overthrow Muammar Qaddafi in Libya, leading to anarchy and civil war. Pressuring Husni Mubarak of Egypt to resign, then backing the Muslim Brotherhood, leading now-president Sisi to turn toward Moscow. Alienating Washington's most stalwart ally in the region, the Government of Israel. Dismissing ISIS as "junior varsity" just before it seized major cities. Hailing Yemen as a counterterrorism success just before its government was overthrown. Alarming the Saudi authorities to the point that they put together a military alliance against Iran. Coddling Recep Tayyip Erdoğan of Turkey, encouraging his dictatorial tendencies. Leaving Iraq and Afghanistan prematurely, dooming the vast American investment in those two countries.

And, most of all: Making dangerously flawed deals with the nuclear-ambitious mullahs of Iran.

'Is this ineptitude?', Pipes asks rhetorically.

As a man of the left, Obama sees the United States historically having exerted a malign influence on the outside world. Greedy corporations, an overly-powerful military-industrial complex, a yahoo nationalism, engrained racism, and cultural imperialism combined to render America, on balance, a force for evil.

In short, The Obama Doctrine can be summarized in a single sentence: "Warm relations with adversaries and cool them with friends."

The great question ahead is how, in their wisdom, the American people will judge the Obama Doctrine when they next vote for president in 19 months. Will they repudiate his policy of shuffling and contrition, as they comparably did in 1980 when they elected Ronald Reagan over Jimmy Carter? Or will they choose four more years of it, thereby turning the Obama Doctrine into the new norm and Americans into European-style remorseful masochists?

And say your prayers.

Obama is responsible for the "civil war" in Syria, which allowed ISIS to take advantage and grow then dominate

And here I thought the Obama doctrine was:

Tear everything down, f**k everything up, ruin your enemies, and smile and act like the greeter at Wal Mart the whole time.