President Obama lied to the American people about the true nature of Iran's nuclear program, according to declassified material. Add this to a litany of lies told by our president.

Declassified material reported on by Bloomberg confirms the following: 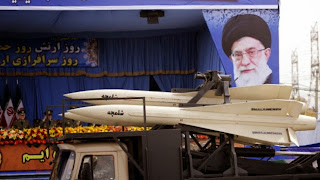 “The Barack Obama administration has estimated for years that Iran was at most three months away from enriching enough nuclear fuel for an atomic bomb … Energy Secretary Ernest Moniz acknowledged that the U.S. has assessed for several years that Iran has been two to three months away from producing enough fissile material for a nuclear weapon. When asked how long the administration has held this assessment, Moniz said: 'Oh quite some time.'”

However, as Bloomberg also reports, and as you probably remember, Obama has consistently told the American people that Iran is at least a year away from developing a nuclear weapon. This is otherwise known as the “breakout time.”

Obama even contradicted Israeli Prime Minister Benjamin Netanyahu on the issue. Netanyahu's breakout time has always been more urgent than Obama's. Now we know that Bibi was closer to the truth and Obama knew the truth but lied about it.

It seems as though we are willing to do just about anything to secure a deal with Iran, even if it's a bad deal.

This includes giving Iran $50 billion as a bonus for signing a nuclear agreement. You read that correctly! This cash release would be in addition to the lifting of sanctions, which is also worth billions. According to experts, that “could be the largest cash infusion to a terror-backing regime in recent memory.”

These negotiations with Iran should not have gone any further without Iran agreeing to a few preliminary things, including recognizing Israel's right to exist and stop sponsoring terrorism.

Those seem like pretty reasonable requests for a country that claims it wants to be a part of the community of nations. Yet instead, we bow to their demands without any reason to trust them. Even as they are shouting “death to America,” we continue down a path towards a nuclear Iran.

And then on top of it all, we have this proxy situation with Iran playing out off the coast of Yemen.

If you will remember, Iran launched a convoy of ships off the coast of Yemen, where it is supporting the Houthi rebels whom have toppled the government and continue to take over cities and government institutions.

As of yesterday, the United States has stepped up its response and is moving a Navy vessel off the coast of Yemen for the purposes of blocking Iranian ships carrying weapons to the Houthi rebels.

According to the White House, it has concerns about Iran's support of the Houthis. No kidding! Why can't the nuclear negotiations start there? Stop fomenting terrorism in the region by supporting the Houthi rebels before we will agree on a nuclear deal.

It's hard to believe that the United States has come to this position in its international standing. We won't stand up for our red lines, we will berate our allies and coddle our enemies. Unbelievable.

The question is, if the US has known "for years" that Iran is mere months away from developing a nuclear weapon, then why have they *NOT* developed one already?!? Either there is something wrong with this estimate *or* the Obama Administration has been doing its job in keeping Iran from developing the nuclear weapon!