Interesting how this just turns up now, ain't it? Cliff Kincaid reports: 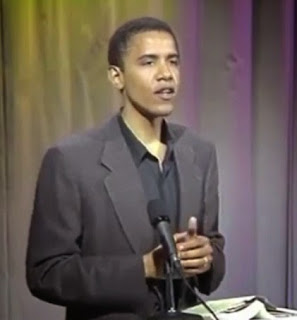 In an extraordinary development, film of Obama explicitly and openly identifying “Frank” as Frank Marshall Davis has suddenly surfaced on the Internet.

It is described as having been recorded on September 20, 1995, with the program originally airing on Channel 37 Cambridge Municipal Television as an episode of the show “The Author Series.”

Obama admits the mysterious “Frank” from his book Dreams from my Father is indeed the communist Frank Marshall Davis. But Obama does not reveal that Davis was a communist.

And click here if you don't know who the virulent Communist Frank Marshall Davis was.

And speaking of vintage media censorship of Obama's real background: I wonder what will happen when The Los Angeles Times decides to finally release the videotape of Barack Obama toasting Islamic terrorist Rashid Khalidi?

To borrow a phrase,What difference at this point does it make? We all know by now that 0bama is hell bent on laying us low and causing as much harm to America between now and 1/20/17.

Frank Marshall Davis was probably Hussein's real father. Sort of looks like him, too.

But whatever you do, don't call them communists. That isn't how you win elections.

America - you've been had. Thank Nancy Pelosi and the alphabet media.
It was nice while it lasted, wasn't it? Our Republic, that is.

Probably buggered him as well.

In this said video, he clearly discloses who “Frank” is, and discusses the various lessons he learned from him—including how racist white people once were.

“I have a discussion with him about the kinds of frustrations I’m having, and he sorts of schools me that I should get used to these frustrations,” Obama said of his conversations with Frank, who was a black man from Kansas.

The racists on the right claim that THIS is proof of Obama’ communism. Because remember, according to them if you show respect to groups and religions that AREN’T dominated by white people, and remind the world of America’s dark history (And yes, America DOES have a dark history.) You might be a Communist.

But Common sense, fact-checking and reality begs to differ.

It’s obvious that Frank never indoctrinated Obama in communism. Obama didn’t even know about Frank’s CPUSA background! Frank was a CLOSET member who never admitted his membership in public, much less advocate communism!

And yet, nowhere does he say, or even suggest, that he was his mentor.

Ignoring the other fact that there is no evidence that Davis was a Communist agitator. But then again, facts and birthers don’t go together.

video is nothing than an attack piece from the racists and bigots in America and STILL can’t accept the cold-hard fact that a black man is President of the United States. that all this is, was and ever will be. People who don’t like Obama’s way of governing don’t care about this.

Judging by the fact that the Dow has tripled during his administration, I would have to say he’s the worst communist ever.

If he wanted to destroy America he’s taking his time and doing a lousy job of that too. All leading economic indicators are positive. The only perspective in which he’s doing a bad job is through the crap colored glasses of Fox news.

-Barack Obama is NOT a Muslim and even if he was, doesn’t matter.

-Barack Obama is NOT Anti – American.

-Barack Obama is NOT a Marxist. in fact, one should understand the concept of Marxism before posing such a question.

-Barack Obama is NOT a homosexual. Those making such claims are now grasping at straws.

-Barack Obama is NOT a traitor, though those that continually denigrate and defame the Standing President of The United States have a touch of treason in them.

-Barack Obama is NOT a communist. Again, one must understand the concept before posing such a question.

-Barack Obama does NOT hate America. He IS the duly elected President.

-Barack Obama is NOT a dictator. He is the 44th President of the United States of America.

Seriously, Stop blaming the Black Man in office for EVERYTHING wrong and grow a brain, but that will be too much for you racists!

"video is nothing than an attack piece from the racists and bigots in America" - Nah, the video is from the guy who videoed obama.
"and STILL can’t accept the cold-hard fact that a black man is President of the United States." - Nah, I'd be happy with a black conservative president.

Anon 7:14: Obama is a POS and a fraud; and I say that not because of his skin color, but because he's a Marxist, an inexperienced community agitator, a race-baiter, and has numerous ties to terrorists.

It's not his race I care about, it's his ideology of hate.

Thanks,anonymous,for doing what you're paid for,to shill for the worst,while denigrating the truth.You've revealed more about your elitist attitude and lack of understanding than anyone you disagree with ever could.Thanks for reminding us why America rejected the ideology of the extreme left,the tactics of division,and the utter silliness of those who believe themselves as above the common people,while rejecting the common sense that grounds we,the people in reality.