Rand Paul Scares the Bejeezus Out of the GOP Establishment

As we’ve said before the people who most fear a legitimate (semi) libertarian movement within the GOP are the old big government Republicans, it’s not liberals. (At least not yet.) 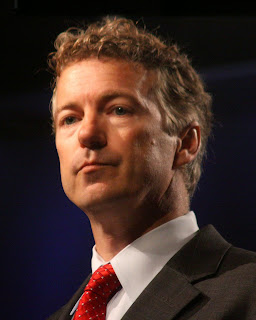 There is a cadre of Washington DC neocons who are running around with their hair on fire right now because of the warm response Rand Paul continues to get from the public. The establishment, the consultants, the big military, the “deficits don’t matter” crowd feel right now that they have been outmaneuvered by Paul. And they can’t believe it.

Of course there is a long way to go before even the primaries start. People like Ramesh Ponnuru will have plenty of time to make their case for Jeb Bush or, well, I guess Jeb Bush. Perhaps the country will turn and embrace yet another big government Republican. (Not to mention yet another Bush.) But I think that is an increasingly tall order.

Rand Paul really isn’t a libertarian. He has strong libertarian tendencies, but he has some serious conservative tendencies as well. This is actually where I think the great swathe of suburban, more or less Republican voters are. They are sick of the endless wars. They want taxes simplified and reduced. They want to be left alone in their private lives. They are not interested in regulating the private lives of others. And by and large Republicans are not terribly fond of GW Bush who is seen by many as a spendthrift and an unwise executive.

Ponnuru and his friends at AEI probably see the GW Bush years in a different light however.

The second is that Republicans don’t believe that they need to move in his direction on these issues to win elections. Most of them think a relatively muscular stance on foreign policy is an asset, not a liability. On some of Paul’s other issues — drugs, surveillance, criminal-justice reform — moving in his direction might help the party, but only a little. In other words, Republicans don’t think their positions on these issues are in need of much change. Democrats were in a different position when Clinton ran as an opponent of liberal orthodoxy on welfare: That orthodoxy had hurt Democrats badly, and a lot of them knew it.

If Ponnuru really believes that “Republicans” don’t realize that they need to move from old positions on open ended war, marijuana, surveillance, and criminal justice reform to win – all code for the reassertion of our God given rights under the Constitution – then he’s simply behind the curve. This is not 2012. Many people have woken up in “conservative” ranks. Perhaps Mr. Ponnuru has been spending too much time in Washington.

Am I saying that there are throngs of GOPers joining NORML or that rank and file Republicans are ready to sign the “non-aggression pledge”? By no means. But a good number within the GOP, outside of Washington actually want a SMALLER GOVERNMENT. This is something Ponnuru and the other big government “conservatives” in DC do not want. It means an end to their time on the center stage.

Sounds good to me.

Jeb Bush scares me. Paul scares me more, not because he isn't better than Bush but because he asires to be Bush.

Freedom has always been an attractive platform. The great problem with selling it electorally is the special-interest dynamic: the prospect of losing one’s special subsidy, privilege, or exemption tends to weigh much heavier in the electorate’s decision making.

Here in New York the problems include subsidies for dairy farmers. Tell a dairy farmer that you favor the elimination of federal subsidies and his fear is that he’ll lose his, but no one else will -- in other words, that he’ll be paying for subsidies for others but receiving nothing himself.

Freedom’s electoral “potential well” is steep precisely because each voter fears that everyone else has more lobbying clout than he does. Russell Baker, a liberal, wrote about this forty years ago in the context of the income tax. Should it be simpler? Sure – but don’t take away my deductions! And thus be it ever, where formerly free men shall stand.