Obama Deal With Iran Leaves a U.S. Marine Behind 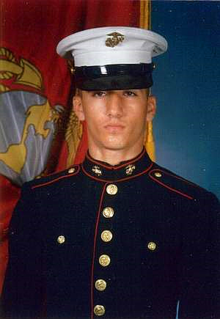 Justice: A Marine veteran has been held captive in Iran since August 2011, when he was taken prisoner while visiting family and charged with spying. Does President Obama hear his plea for unconditional freedom?

With the exception of deserters like Bowe Bergdahl, those who put on a uniform and serve their country seem like afterthoughts to this administration, if they're thought of at all.

Just ask Andrew Tahmooressi, the Marine sergeant allowed to languish 214 days in a Mexican jail for the crime of missing a highway exit. Or now, Amir Hekmati of Flagstaff, Ariz., a Marine vet who sits in an Iranian jail, having made the mistake of trying to visit his Iranian family.

Hekmati has been locked up in Iran's Evin Prison since he returned to his ancestral home 3-1/2 years ago to visit family. His parents left Iran when the mullahs took power in 1979. He did not think he would later be a victim of Iranian belligerence and American indifference, accused of being a CIA spy. He was first sentenced to death, but that sentence was overturned, and in a retrial he got 10 years in prison.

Unlike Bergdahl in Afghanistan, Amir served with genuine honor and distinction in Iraq, where Shiite militia groups were supplied with weapons and trained in their use by Iran's Revolutionary Guard. These weapons included sophisticated improvised explosive devices, or IEDs, designed to exploit vulnerabilities in U.S. military vehicles and increase American casualties.

Anyone of Iranian ancestry who served in the military of the Great Satan is certainly no favorite of a state sponsor of terror working daily to develop the nuclear weapons to fulfill the Iranian pledge of wiping Israel off the face of the earth.

It's no surprise that Iran might want to make an example of Hekmati in an action reminiscent of the taking of U.S. hostages at the U.S. embassy in Tehran in 1979.

He is no longer in solitary confinement and has been able to communicate and dictate letters to his family over the phone. He also dictated one to President Obama last December. In that letter, Amir said that he'd accept "nothing but my unconditional release."

Nor, he said, did he want to be included as part of any nuclear deal with Iran or be swapped in a trade for Iranians held by the U.S. as Iranian officials had been suggesting. And certainly he wanted no part in another trade such as that of top Taliban generals for deserter Bergdahl.

Former talk show host and veteran Montel Williams, who labored mightily for the release of Tahmooressi from his Mexican captivity, is working hard for Hekmati's release — harder, it seems, than the Obama administration.

The president did mention Hekmati during his March 20 address to the Iranian people on the occasion of the Persian new year. But it's the Iranian government that's holding Hekmati, and our government is not doing much on his behalf.

"I do know for a fact after reaching out talking to members of Amir's family," says Williams, "that our State Department is not talking to them. We don't know what is going on."

Rather than wishing the Iranians a happy new year, Obama should demand Hekmati's release. Marines are good for more than holding presidential umbrellas. Maybe he can even welcome Hekmati's parents in the Rose Garden. Or maybe not.

obama had no interest in saving this Marine in the first place.