Colin Campbell and Pamela Engel offer an insightful summary of the Clinton Crime Family's latest scandal. Yeah, I know, it's hard to keep 'em all straight. I mean the latest one, where Hillary's State Department approved the sale of nuclear weapons material to Russia (and therefore likely Iran) after the Clintons received millions from Russian government entities. 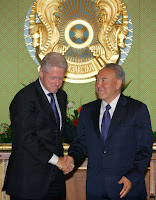 • Canadian company Uranium One owned uranium mines in the US and Kazakhstan.

• Uranium One's mines account for 20% of the uranium mined in the US. Uranium is used for nuclear weapons, and it's considered a strategic asset to the US.

• Russia’s state-owned atomic agency, Rosatom, bought a 17% stake in Uranium One in June 2009.

• The Russian atomic agency decided it wanted to own 51% of Uranium One in June 2010. To take a majority stake in Uranium One, it needed approval from a special committee that included the State Department, which Hillary Clinton led at the time.

• Investors in Uranium One gave money to the Clinton Foundation starting in 2005 and through 2011. On June 29, 2010, Bill Clinton was paid $500,000 to speak in Russia by an investment bank with ties to Russia's government that had a buy rating on Uranium One’s stock.

• In January 2013, despite assurances to the contrary, a subsidiary of Rosatom took over 100% of the company and delisted it from the Toronto Stock Exchange.

• Clinton was required to disclose all of her foundation's contributors before she became secretary of state, but the Clintons did not disclose millions of dollars donated by the chairman of Uranium One while the review of the deal was ongoing.

"Uranium One's chairman used his family foundation to make four donations totaling $2.35 million," The Times reports. "Those contributions were not publicly disclosed by the Clintons, despite an agreement Mrs. Clinton had struck with the Obama White House to publicly identify all donors. Other people with ties to the company made donations as well"...

REUTERS/Shamil Zhumatov SZH/DHKazakh President Nursultan Nazarbayev with former US President Bill Clinton in Almaty in 2005. Clinton traveled to the ex-Soviet Central Asian state to sign an agreement with the government, admitting Kazakhstan into the Clinton Foundation HIV/AIDS Initiative Procurement Consortium.

REUTERS/Yuri Kochetkov/Pool Putin with Nazarbayev after a joint statement following their talks in Moscow's Kremlin in 2007. Nazarbayev invited Putin to pay an official visit to Kazakhstan to discuss joint uranium mining and enrichment.

REUTERS/Andres StapffUS President Barack Obama with Putin before the first session of the G20 Summit in Los Cabos in June 2012.

You can read the whole thing at Business Insider, which -- by the way -- is a leftwing rag.

Finally, here's a TV series script that can fill the void left by the Sopranos

Of course, Liberals will be *quick* to counter with their "Bush-Cheney-Halliburton-Saud" backdoor dealings and "Bush Lied, People Died" mantra, saying either the NeoCons started it or that whatever the Clintons did pales in comparison...

That's not the point, of course: The point is the glaring Hypocrisy of the Liberal ;-)