At this point, why not? 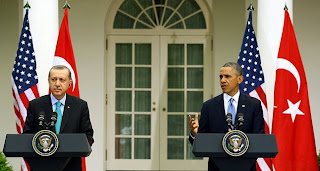 [The] presidents of Turkey and the U.S. will open the Turkish-American Culture and Civilization Center in Maryland, Turkey's foreign minister said Sunday.

Mevlüt Çavuşoğlu visited the center that also has a middle-sized mosque on a three-day visit to Washington, and lunched with representatives from the American Muslim community.

"During a phone call, President (Recep Tayyip) Erdoğan asked President (Barack) Obama to accompany him in opening the center together and President Obama accepted his offer'in principle,'" Çavuşoğlu told the representatives.

Simultaneously, our beloved president is silent on the scourge of anti-Christian violence being meted out by Islamists around the world.

And of course he has no time to visit the southern border, the scandal-ridden Veteran's Administration, or Israel's prime minister.

This is a man on a mission and it's truly unfortunate that no one in the media has ever appeared willing to ask precisely what that mission is.

Quite frankly, it is because they already suspect what that mission is, and do not think it would look good in print for the less than fully enlightened.