Politics: As refugees flood the Mediterranean, Europe is in a crisis. But the issue is not about how many lifeboats to send; it's the failed state of Libya. Why isn't Hillary Clinton, the architect of U.S. Libya policy, answering questions? 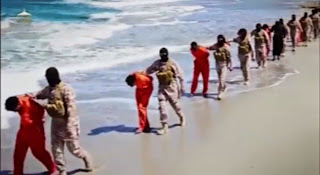 The Islamic State beheaded more Christians in Libya, where the failed state enables terrorists to flourish and thousands are dying attempting to flee.
The European Union is being hit with a refugee crisis of unprecedented proportions as another boat loaded with emigres capsized near the Italian island of Lampedusa on Saturday. Nearly all of its 900 passengers drowned in what's billed as the worst maritime disaster in the history of the Mediterranean.

The Mediterranean, now known as "a cemetery without graves," will be crossed by some 500,000 refugees this year, up from about 220,000 last year.

At the same time, a second round of beheadings of Christians by Islamic State terrorists on Libya's beaches over the weekend drives the point home: Terrorists are on the rise, and a strong base of their operations is in Libya, a failed state that was taken over by a vile menagerie of pirates, slavers and smugglers in the rubble of the toppled Gadhafi regime.

Who's responsible here? None other than Hillary Clinton, who served as President Obama's secretary of state during the overthrow of the longtime dictatorship of Moammar Gadhafi in 2011.

And that raises again the valid questions on what really happened in Libya.

At that time, the U.S. was partnering with Europe, chiefly France, in a supposedly easy operation to get rid of the annoying dictator and then watch what the alliance thought would be the flourishing of democracy. It was called "leading from behind."

The U.S. withdrew support from Gadhafi — who, by the way, had voluntarily renounced his nuclear program in the interest of preserving himself — only to be waylaid by mobs and killed.

Instead of democracy, what flourished was barbarism with absolutely no state emerging from what had been a largely tribal society.

The brazen murder of U.S. Ambassador Christopher Stevens and three other Americans on Sept. 11, 2012, showed what was ahead for the country instead.

Who let that happen? And who was it who allowed their killers to get away with it with no fear of being hunted down and brought to justice? One suspect sipped on a strawberry frappe in a fancy hotel while being interviewed by the New York Times. He was at ease because he knew nobody was looking for him.

Weapons go unguarded and fall into the hands of terrorists. Islamic radicals destroy the beautiful country of Mali, home to ancient cultural treasures. An even more menacing element takes advantage of the U.S. failure to support Egypt by attacking the country on its western flank, beheading 21 Egyptian Coptic Christians last month, and inserting an explicit threat to Rome with it. They repeated the barbarism over the weekend with another group of Christians.

A disaster this complete is the result of foreign policy incompetence on an untold scale, and demands answers from the policymakers behind it.

But instead of calling on Clinton to answer questions, the press gives her a pass, and the Obama administration watched approvingly as she destroyed a gigantic cache of emails that might have shed light on what kind of trouble she was opening the country to during her service as secretary of state.

It's an outrage, and the press and public have every right to expect answers from her.

Yes Hillary and Obama did help to create the devastating Arab Spring and mass genocides from Syria to Mali - and yes they must be held accountable.

Keep Dreaming.
The country is done. No one is willing to stand up. It's pathetic.

Beck dug into the Soros/Samantha Power/Van Jones/Susan Rice/commie cabal awhile back and never found Hillary to have been in tight with this gang, even though she probably went along with their machinations. But I wouldn't "credit" her with the debacle.

Tubby Trumka and his SEIU boys actually had fliers printed FAR in advance of the "Arab Spring," and goofy Medea Benjamin was handing them out as well.