Do we really need a candidate who is so flippant (or so poorly advised) that he is forced to reverse field on a regular basis? And, more importantly, what do his constant backflips say about his principles?

Oh. And don't even get me started on his support for Mitch McConnell over a true conservative (Matt Bevin) in Kentucky. 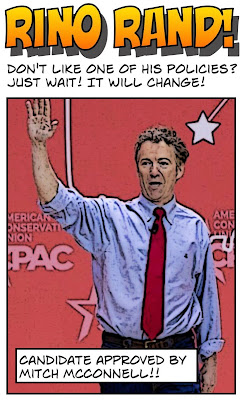 
While a measles outbreak was spurring new calls for vaccinations, Paul said in a Feb. 2 TV interview: “I have heard of many tragic cases of walking, talking normal children who wound up with profound mental disorders after vaccines.” ... Pediatric groups called the remarks irresponsible, saying the benefits of child vaccines greatly outweigh the risk.


Campaigning for a Nebraska Republican in August, Paul sparred with reporters who asked about his earlier calls to end foreign aid to all countries, including Israel... in 2011, Paul proposed a budget that would end all foreign aid, including that for Israel. He defended the position in an ABC News interview at the time.


Kentucky's Republican nominee for Senate, Rand Paul, is running away from his past support for abolishing the federal income tax in favor of a national sales tax... As the [Lexington] Herald-Leader wrote, Paul was on shaky ground when he said he has "never said anything like" support for the fair tax.

Rand Paul backtracks on comments about Cheney and Halliburton


Rand Paul wants to clarify recent criticism about the Republican focus on voter ID laws. Last week the senator said it was "wrong for Republicans to go too crazy on this issue because it's offending people." But speaking to Sean Hannity on Tuesday, Paul said his comments got wrongly overblown.


Sen. Rand Paul (R-KY) said on Sunday that he doesn’t think it’s a good idea to shut down the government over the funding of Obamacare, but that he is hoping his party does it anyway... He was one of the fifteen senators to sign onto a letter vowing to block funding the health care law. But on Sunday, Paul told Fox News Sunday that, “I don’t think shutting down the government is a good idea.”


n. Rand Paul (R-KY) toned down his criticism of Secretary of State Hillary Clinton on Wednesday afternoon, admitting on CNN that the Iraq war was a greater tragedy than the attack on a U.S. consulate in Benghazi, Libya.


Just before departing for the rural town here where he performed charity eye surgeries over several days, Sen. Rand Paul (R-KY) caused a stir with an op-ed in Time about the violence in Ferguson, Missouri, calling for the police to be “demilitarized” and saying race skews the application of criminal justice ... In an interview, he elaborated on his article and responded to critics on the right whom he said had misconstrued what he wrote.


Republican Senate candidate Rand Paul backtracked last week on his pledge to erase the federal budget deficit in a year, instead offering several options that he said could get it done within five... Conway's campaign pounced on Paul's comments. Conway spokeswoman Allison Haley said Paul refuses to offer “a straight answer on his secret plans to balance the budget in a year,” and now is “waffling on the amount of time it will take.”


Speaking at a conference last Thursday, Paul twice said he had a college degree in biology... Paul attended Baylor University in the 1980s, but left without a degree. Nonetheless, he was accepted at Duke University’s highly regarded medical school, where he earned a degree.


Sen. Rand Paul made a remark yesterday about same-sex marriage paving the path for marriage between humans and nonhumans, but he quickly backtracked on it, with an aide characterizing it as “sarcasm.”

Rand Paul Reverses Course on the Civil Rights Act of 1964


... tonight on The Rachel Maddow Show, newly minted Kentucky Rebublican senatorial candidate Rand Paul refused to say whether or not he would have voted for the Civil Rights Act of 1964... [a day later] I guess his campaign has enough sense to realize that his view on defending the 'rights' of private businesses to discriminate wasn't an electoral winner [and issued a statement backing the law.]


Sen. Rand Paul (R-KY) is singing a different tune on drones these days, drawing a stark contrast with his previous statements.

Look, I'd be perfectly backing Paul -- as Trevor Loudon suggests -- as a Secretary of the Treasury under Ted Cruz.

But Paul's mouth is a loose cannon and bound to get another Democrat President elected in 2016 during the heat of a campaign. Sorry, that's just reality.

Rand is a liberal with fiscally sound moments.

Think of the money we can save with Dr. Paul, we can disband the military and free dope for everyone! He's a disaster.

He said vaccinations caused mental disorders. A doctor. If he believed what he said he should have stood by it. If he didn't and was just shooting off his mouth for the benefit of the loons in the Paulista base, he's not a serious person.

And the Halliburton comment shows he's just another liberal moonbat.

And coming down on both sides of shutting down the govt? Pick a position. Flake.

I would never vote for Paul. Cruz is the only candidate deserving of the conservative vote. For some reason, I don't trust Walker. He's too chummy with the RINOs.

You sir, are no Ron Paul!