I call Hillary Clinton a billionaire because -- in addition to her personal net worth of about $25 million -- she helps control the Clinton Global Crime Fund Initiative. Thanks to an endless series of "pay-for-play" scandals in which foreign governments donated cash for State Department favors, the Clinton warchest is worth about $2,000,000,000. That's two -- with a "b" -- billion.

Which makes Clinton's attack today on the left flank of fellow multi-millionaire Elizabeth Warren all the more obnoxious. 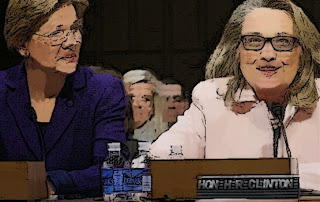 So Hillary Rodham Clinton has acquired a brand new sobriquet. She’s come a long way, baby. She’s gone from the sharp knife-edge of bankruptcy, to having earned the nickname “Quid Pro Dough.” I don’t envy her wealth. I see her, but I wouldn’t want to be her. She’s made her money the old fashion way; she influence-pedaled...

Perhaps this is why she campaigns on the idea of hating success that is acquired by others. Here is her take on being an even more lame and more hypocritical version of Sen. Elizabeth Warren (D-MA)...

Mrs. Clinton pointed at the top category and said the economy required a “toppling” of the wealthiest 1 percent, according to several people who were briefed on Mrs. Clinton’s policy discussions but could not discuss private conversations for attribution.

A “toppling of the 1%?” Does this entail a reprise of the Havana Bull Ring Trials? ... When Che Guevara lined people up against the wall it wasn’t to rank them from ugliest to dumbest*. Leftism always has purpose. As long as you have 1 dime more than the Leftist down the block, Leftism has a purpose. She’s doing her five fundraisers at the end of April for the people, you see.

With $2Bil in the bank vaults of the Clinton Foundation, she wants to get other people’s money out of politics. With $262Mil in “donations” during 2013 alone, she now wants to topple the 1%.

Like we say when the corporate jetsetters fly millions of miles in their private planes to convene meetings on "global warming", I'll believe Hillary's rhetoric when she starts living it.

Terrific piece, but it's influence peddling, not pedaling! :)