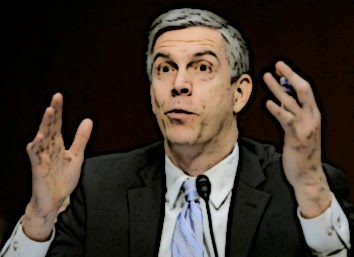 The parade of nitwit dipshits in the Obama Admin never stops. The effing clown car is overflowing

Classic example of the third rate intellectuals in the Obama administration. Appears he has corralled all of them.

And why dies Duncan threaten punishment to states rather than directly to parents? Because he knows the sanctity of parental rights and that he can't control parents taking their legal responsibility to provide for the welfate of their children. Classic case of big boy bullying.

The tragedy is that many Civil Rights and disability groups have been co-opted or somehow actually believe that standardized testing is the path to a quality education for traditionally underserved students. Students who are struggling need engaging curricula and teachers who are flexible enough to challenge them from where they are, not hold them to an arbitrary standard that many privileged students have difficulty meeting. To watch a child suffer emotional pain from participating in an inappropriate and convoluted test such as the PARCC should be clear evidence that the testing is misguided. It is astounding to me that officials such as Duncan and those in state departments of education can be so arrogant and so vindictive as to further punish those who have been beaten down by more than a decade of test and punish tactics. The amount of time, energy, passion, compassion, and pedagogic legitimacy that the Opt Out movement has provided over the past few years is tremendously admirable. To reduce the Opt Out movement to a racially motivated attempt to deny a quality education to traditionally underserved groups is shameful in the extreme. Fire Arne Duncan!

Your headline isn't misleading. It's a straight up lie.

It is high time they get there "common core" stuffed up their back sides, sideways! Let them try to "step in" and see if they dont end up "stepped on" before it's over...

So what would hapens if the kid goes in and deliberately blows the test?

The federal Department of Education is unconstitutional and contrary to principles of liberty. It should be abolished, as the Republicans promised thirty five years ago.

He thinks he's above the law and our constitutional rights. It's ok, he'll answer to the Lord one day and then he will pay adore price when he's cast into hell along with Satan and other evil doers. He's a delusional fool!

So...President Obama is a racist. Got it.

Last commenter: Obama is a racialist who accuses those who disagree with him of racism.

Pity you're too dense to understand that.

But not unexpected for a big government drone.

I am a parent of a special needs child. I definitely don't want my son doing standardized tests. It would be terrible for him. He would do terribly, act out in frustration, and not accurately measure his progress. Arne Duncan is clearly clueless. My son's teachers and I know his progress and what he needs. We don't need the federal government (or even the state government) involved in his education.

The parents always have the option of instructing their child to leave the test blank, thus averaging a zero into the school's test score. Enough of those and the schools will be much less interested in coercing resistant parents into allowing their children to "take" the test.