Lee relays the following 'from a proven reliable source in a position to know this as true':

CBS Baltimore: "Sheriff: ‘I Was Sick To My Stomach’ After Being Told To Stand Down" 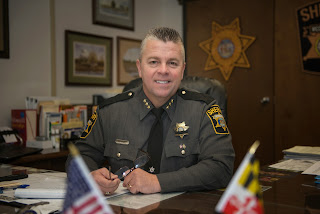 But what shocked [Wicomico County Sheriff Michael Lewis] the most, he said, was when city police told him not to confront and accost the rioters...

“I was sick to my stomach like everybody else. … This was urban warfare, no question about it. They were coming in absolutely beaten down. The [city officers] got out of their vehicles, thanked us profusely for being there, apologized to us for having to be there. They said we could have handled this, we were very capable of handling this, but we were told to stand down, repeatedly told to stand down,” he said. “I had never heard that order come from anyone — we went right out to our posts as soon as we got there, so I never heard the mayor say that. But repeatedly these guys, and there were many high-ranking officials from the Baltimore City Police Department … and these guys told me they were essentially neutered from the start. They were spayed from the start. They were told to stand down, you will not take any action, let them destroy property. I couldn’t believe it, I’m a 31-year veteran of law enforcement. … I had never heard anything like this before in my life and these guys obviously aren’t gonna speak out and the more I thought about this, … I had to say a few things. I apologize if I’ve upset people, but I believe in saying it like it is.”

What we know so far:

- Valerie Jarrett is the coordinator of "demonstrations" in cities nationwide. She is "on the phone" with mayors, radicals and activists. NYC is the next big one and has already started.

- Every incident of a black person getting shot by police or roughed up resisting arrest is being examined by a Democrat team to see how useful it could be. Media allies will be told which to go after and what messaged to include.

- They will occur in Democrat-run cities and the police will be hamstrung (stand down, fall back, don't look aggressive, etc....) to maximize vivid scenes of violence and destruction and make authorities look powerless.

- This is an IW [information warfare] campaign that will go on all summer and escalate in cities around the country. The overarching memes will be economic injustice, judicial prejudice, income inequality, white racism and police brutality. They are throwing the police and firefighter unions under the bus on this.

- The goal? Set up another Dem messianic candidate and blame Republicans for the violence. Party before country for Democrats, always.

- Despite the Democrats owning this (cities dominated by Democrats for many decades... like Baltimore) they are convinced they can turn it around and their constituency is dumb enough to buy. They are probably right.

- Louisville and Baltimore were the test events. Baltimore went well. Sharpton is on his way to cement it in, then on to NYC.

- Pointing all this our too loudly may get you a Breitbart event. Yes, it has gotten that bad.

"Every incident of a black person getting shot by police or roughed up resisting arrest is being examined by a Democrat team to see how useful it could be. Media allies will be told which to go after and what messaged to include."

You may be right. I haven't seen much recently about the South Carolina shooting which--if taken at face value without the full evidence being reviewed--looks like a slam-dunk case for their side. Why stop talking about it unless they got it all wrong and the shooting was more than justified?