Even the saps at The Olde York Times were impressed: 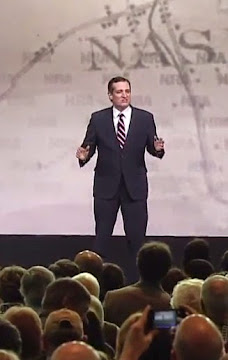 Nearly every potential Republican presidential contender will be speaking Friday on a single issue: gun rights.

As First Draft considered how best to parse their speeches at the National Rifle Association’s Leadership Forum in Nashville, we hit on a bullet-point approach. And yes, that sent us down a gun-pun rabbit hole. (Or was it into a foxhole?) Senator Ted Cruz of Texas addressed the forum.

Bull’s-Eye: Mr. Cruz recalled sending a letter to Harry Reid following the Sandy Hook tragedy promising to “filibuster any legislation that undermines the Second Amendment right to keep and bear arms.” That comment was met with an extended standing ovation.

Misfire: None. He relied heavily on the stump speech he has been polishing as the first Republican to announce his candidacy.

“Cold Dead Hands” Moment: Recalling the beginnings of the Texas Revolution, Mr. Cruz said: “If Hillary Clinton is going to join with Barack Obama and the gun grabbers and come after our guns, then what I say, is come and take it.”

Other Ammo: As part of his stump, he often talks about Iran and “repealing Obamacare,” and he touched on nearly all of those issues.

Cross Hairs: He pulled no punches with his criticism of President Obama and Hillary Rodham Clinton on their foreign policy. He also repeated his favorite line about the Ready For Hillary Super Pac making its first hire: head of email security.

Pump Action: Even in front of over a crowd of more than 4,000, Mr. Cruz enjoyed the call-and-response that follows him on the campaign trail.

The best video blog on the planet -- The Right Scoop, a 2014 Fabulous 50 Blog Award Winner -- has Cruz's entire speech.

Cruz is the only candidate I will vote for. The communist media will do everything they can to demonize Cruz, but it won't work this time. People can see in Cruz what they don't see in Obama. Honesty, God-fearing/loving, and they trust him and his word. No one trusts Obama. He isn't trustworthy. He is a pathological liar. America made the biggest mistake it could have putting Obama at the helm of our beloved country. Why they won't impeach him is a crime in and of itself.