Larwyn's Linx: How long can this train wreck continue? 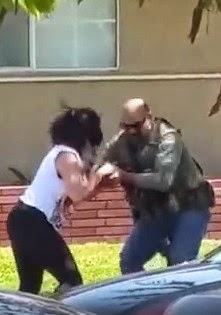 Bill Clinton sold us to the ChiComs; Hillary sold us to the Russians: RS
Clinton Restoration could be in jeopardy: Jonah Goldberg
White House Refuses to Comment on Shady Deal Hillary Made With Russia: Glob

Earth Day: Kwanzaa for liberals: RS
2 Degrees C Is Like The Most Important Number No One Has Ever Heard Of!: Cove
Follow the Money: Earth Day 2015: Chris Walker

How the Constitution was Defeated in 1788: Russell E. Saltzman
Stay Tuned, This Could Still Get Interesting: MOTUS
Former CIA Officer Explains how to Apply Interrogation Techniques to Everyday Life: Mike Doherty

Image: A US Marshal Smashed a Woman's Phone Because She Was Filming Him in Public
Today's Larwyn's Linx sponsored by: Isn't it time for a principled conservative? Ted Cruz 2016: Official Site

2. Deflect: Blame is shifted, usually to Republicans and the media.

3. Demean: People who question or criticize the Clintons get tarred as right-wing extremists, hacks, nuts, or sluts." --Ron Fournier

The culture of corruption in D.C. is astounding. And, I fear, beyond retribution. It's both parties and the leadership of both parties are working together - not for their constituents. The newer and more junior members have been taken to the woodshed and told that the better vote how they are told to vote. There are some who are bucking the establishment, but there are far too many who have become traitors. The Loretta Lynch nomination was "in the bag" a long time ago. McConnell just wanted to get some street cred for getting the anti-trafficking bill passed and make it look like he is standing firm - when he knew damn good and well that Lynch would be nominated. It' all lies and show-boating. Those of us paying attention are constantly angered, frustrated b the low life actions of the Republicans who won a super majority last year and have done nothing to earn it. It is a very sorry, despicable state of affairs that this country is in and our "ELECTED" officials are doing nothing to help America, only themselves and the foreign and communist powers that give them money to steal elections (Soros, the Chamber of Commerce, etc.) They are systematically trying to annihilate conservatives. And, I'm sorry to say, they are doing a damn good job of it.