THE POWER OF TED CRUZ: Top 5 Increasingly Shrill and Hysterical Attacks on the Conservative Superstar 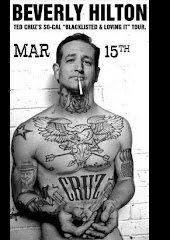 Ted Cruz backers have ushered in a new era for super PACs.

Supporters of the Texas Republican presidential candidate made a bombshell announcement this week — that a network of four affiliated super PACs will have raised an eye-popping $31 million by the end of the week. The disclosure, coming within weeks of Cruz launching his campaign for president, has sent deep ripples through the political fundraising world.

The idea of not one, but multiple, affiliated super PACs ostensibly working together to haul in donations for the same presidential candidate is unprecedented, campaign finance experts say.

Ted Cruz has a Latino name. He has a Latino background. And he’s one of the few Latinos to have ever run for the presidential nomination of a major party.

But is he Latino enough?

Somehow I don't see anyone questioning whether a Democrat is "Latino enough".

Rand Paul Did It Right Where Ted Cruz Stumbled

There are many ways to appeal to millennials and unfortunately Sen. Ted Cruz (R-Texas) is not off to a good start.

Ted Cruz, being a good Republican, followed his predecessors in making the Republican party the brunt of another joke. Sen. Cruz’s announcement was filled with a comedy of errors and apparently orchestrated by the same people who did those horrible “hipster ads” put out by the GOP last year.

Apparently, Sen. Cruz and his team thought it would be a great idea to announce his candidacy for president at a polarizing private Christian university during a school convocation where attendance is mandatory.

"Not off to a good start"? In the real world, "Ted Cruz Campaign SuperPACs Raise Record $31 Million in Under a Week."

I mention this because Rand Paul is running for president. Ted Cruz has been running for president for weeks now. We are just a few weeks into the Eternal Grind of Election and already the amount of time we have dedicated to this prerequisite pablum is alarming. It makes no difference who says it. It always sounds the same.

Maybe when it comes to small government principles, their answers to stupid questions are exactly the same.

This week at a campaign stop in Iowa—Jesus Christ, how am I already typing those words nine months before the caucuses even happen?—Senator Ted Cruz reminded a small Methodist college audience why his presidential candidacy is barely more than a figment of the imagination.

Now try to imagine similar articles and posts about a Democrat?

Don't worry. I'll wait here while you come up with some examples.