The Most Amazing Economic Chart of All Time 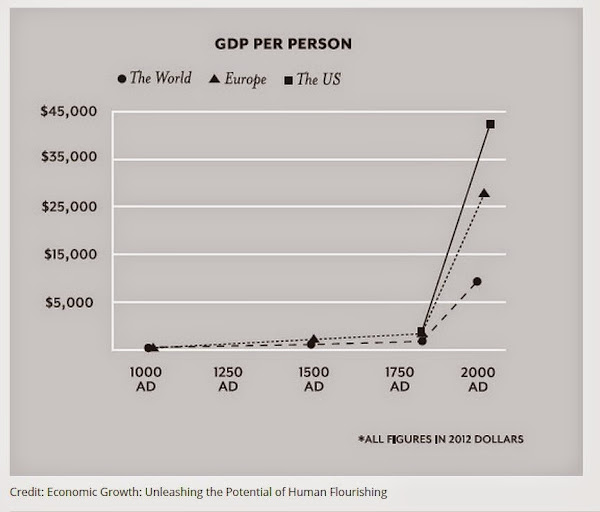 I have referred to the above chart as “The most important economic chart in Western civilization.” How did that amazing growth trajectory happen? As Deirdre McCloskey suggests, the West became a business-admiring civilization and that changed everything. We started respecting and rewarding innovators — and the creative destruction they unleash. But as James Bessen explains in Harvard Business Review, it took awhile for workers to benefit:

Too often, when people think about technology, they only think about the initial invention … Yet most major technologies develop over decades, as large numbers of people learn how to apply, adapt, and improve the initial invention. The initial power loom—one of the transformative technologies of the Industrial Revolution—automated weaving tasks, allowing a weaver to produce twice as much cloth per hour. But over the next century, weavers improved their skills and mechanics and managers made adaptations and improvements, generating a twenty-fold increase in output per hour. Most of the gains from this technology took a long time to realize, and involved the skills and knowledge of many people. …

During the 1830s, the textile mills mainly hired workers who had no prior experience. Experience acquired at one mill was not necessarily valuable at another because mills used different versions of the technology and organized work in different ways. But without a robust labor market, textile workers could not look forward to a long career at different workplaces and so they had little reason to invest in learning. After the Civil War, the market for skilled textile workers became very active. Only then did wages begin to grow vigorously. Weavers’ hourly pay in Lowell changed little between 1830 and 1860, but by 1910 it had tripled. It took decades for the training institutions, business models, and labor markets to emerge that unlocked the benefits of technology for ordinary workers.

Of course, technology and skills were not the only factors that helped boost wages. Growing capital investments made the workers more productive, and growing opportunities for women workers helped increase their pay. Unions also played a role, especially during the 20th century. But consider the magnitude of these changes: studies have shown that unionized workers earn about 15% more than comparable nonunionized workers. That’s a meaningful difference, but it looks small compared to the weavers’ three-fold increase in wages. Ultimately, the biggest factor in that wage growth was technology, the productivity growth it unlocked, and the development of mature labor markets that valued the weavers’ skills.

As Beseen also notes, similarly slow progress was seen with other key technologies such as steam engines and factory electrification. Not only does the labor market need to adjust, companies need to figure out how to best use these technologies. Along the same lines in “The Second Machine Age,” MIT economists Eric Brynjolfsson and Andrew McAfee relate how electric motors initially failed to increase productivity much over their steam predecessors (suggesting we are still figuring out the IT revolution):