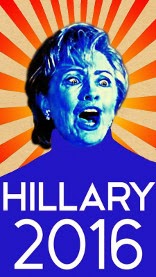 I'm Jimmying Cartier's and I'm Running for President: Mark Steyn
Hillary to connect with the middle class in Iowa with two closed events: WZ
Hillary Takes Pit Stop To Eat At Chipotle... and Nobody Recognizes Her: WZ

Concerned about refugees coming to your state? Get your state plan!: Ann Corcoran
Illegal Alien Gets Only 29 Months Despite Stealing US Identities for 30 Years: RWN
Stanford Student Candidate Says Questioned About Being Jewish: LI

The press is beginning to notice the economic recovery is stalling: Noah Rothman
April's Dismal Job Numbers Force Media to Finally Admit The Economy is Awful: Ace
Do You Want to be a National Convention Delegate?: Morton C. Blackwell

The Secret Republicans of Silicon Valley: Rebecca Nelson
Hop Theory: It is Like Tea Bags, But for Making Beer Tastes Less Boring: Mike Chua
This Mountain on Mars Is Leaking: Jason Major

QOTD: "In an appearance on CNBC on Monday, President Obama’s former White House Chief of Staff Bill Daley confessed that most Americans have not enjoyed the benefits of the recovery [sic]...

“Hillary Clinton’s challenge is going to be to come up with different plans,” Daley said after being prodded to respond to the economic failures of the Obama era. “She can’t run for the third term of Barack Obama economically.”" --Noah Rothman

You should do a post on HBO's Last Week Tonight. John Oliver is funnier than the mail-it-in corpse of what is now The Daily Show, but Oliver runs hot and cold. On this week's segment on the IRS, Oliver is ice cold. Oliver argues that the IRS is boring, but not evil. The budget should be increased, not slashed. The only bad thing the IRS ever did was a Star Trek video, and those people are now gone. John, please! Louis Lerner is a partisan hack who lied before Congress. Her boss lied before Congress to cover up, and was extremely arrogant about it. Oliver says that the IRS scandal wasn't malicious, but it clearly reflects that. And the IRS is the enforcer of Obamacare taxes (not mentioned). Watch the video and see if you agree with me.