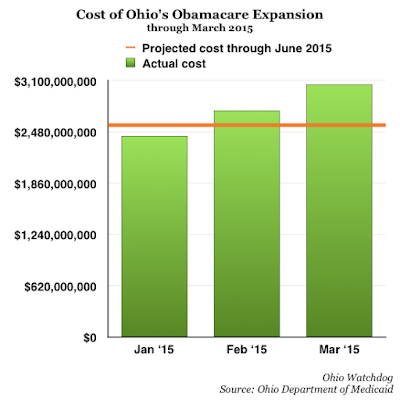 After Kasich expanded Medicaid unilaterally, a state panel approved $2.56 billion in Obamacare spending for the expansion’s first 18 months. The money was meant to last until July, but it ran out in February.

Kasich’s Obamacare expansion is on track to cost more than $4 billion by the end of June.

With federal taxpayers on the hook for all benefit costs and Ohio facing a growing state share in 2017, Obamacare expansion may soon consume 10 percent of Ohio’s budget.

“Comparing budgets to actual and holding those responsible accountable is how private enterprise would work and, in my opinion, also how government should work,” State Rep. Paul Zeltwanger said in an email to Ohio Watchdog.

Expressing concern over Obamacare expansion’s promised federal funding, Zeltwanger said the federal government “already has way too much debt and cannot support all of these additional costs from Obamacare let alone $1.3 billion overruns from one state.”

“I want Ohio to be part of the solution” instead of adding to the $18 trillion national debt, Zeltwanger said. “As elected officials, we need to show fiscal discipline and restraint. We owe this to our children.”

Zeltwanger suggested Medicaid reforms should be put in place before the state even considers expanding the program. In a separate email to Ohio Watchdog, State Rep. Nino Vitale agreed.

“Although we want to help people, there does come a time when there is no more money, and we either have to use debt or cannibalize other programs such as education, to offset these programs,” Vitale said.

“Or, we simply have a limit on what we can do,” Vitale continued. “We all do this in our personal family budgets, or in business, why not in government?”

Vitale and Zeltwanger, both Republicans, were elected to their first two-year terms in the Ohio House last fall. Since 2013, conservative and free-market groups have warned lawmakers not to rely on the Kasich administration’s cost and enrollment projections.

“AFP Ohio has said all along that Medicaid expansion would come at a great cost to state and federal taxpayers,” Americans for Prosperity Ohio deputy state director Baylor Myers wrote in an email to Ohio Watchdog.

Budget-busting Obamacare expansion costs are resulting from a combination of exploding enrollment and higher-than-expected benefit costs per enrollee.

Since taking effect January 2014, Kasich’s Obamacare expansion has enrolled 527,821 people — 44 percent more than the Kasich administration estimated would sign up by July 2015.

As of February, only 42 percent of the Ohioans enrolled in Kasich’s Obamacare expansion were employed.

Despite the welfare expansion’s costs, the Republican supermajority in the Ohio House didn’t strip Obamacare expansion funding from the governor’s proposed 2016-17 budget.

Several House Republicans criticized Kasich’s Obamacare expansion before voting in favor of the budget last week. Zeltwanger, Vitale and three other Republicans voted against the budget because of higher spending driven by Obamacare.

The Kasich administration has not responded to Ohio Watchdog requests for comment as Obamacare expansion’s costs and enrollment have left projections in the dust over the past several months.

As a life long Ohio resident I can vouch that Kasich, as Governor, is a thousand times better than the last two stooges who held the office.

That said, he is a mediocre Governor who has attempted to raise taxes, allows the Unions to continue feeding off tax payers and we are still not a right to work state.

His ego fooled him into considering a Presidential run.