CRIMINAL: Feds order parched California farm district to use 9 billion gallons of water to save... 29 fish

No, this isn't an article from The Onion: "Should California Spend 4 Billion Gallons to Save a Few Fish?" 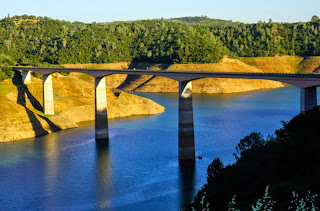 In the the heart of California’s drought-parched Central Valley, fruit and vegetable supplier to the nation, a water district is defying a federal order to give some endangered trout a 3.9 billion gallon water ride out to sea. And it could be the first skirmish in a much wider conflict.

The Endangered Species Act protects steelhead trout, a small population of which are attempting a recovery in the Stanislaus River, which flows out of the Sierra Nevada Mountains into Modesto, in the San Joaquin Valley. So earlier this week a federal fisheries agency—it’s unclear which one, and there are several— told the California branch of the Bureau of Reclamation (another water agency) that the fish needed more water to get out to the Pacific. The bureau in turn passed the order to the South San Joaquin Irrigation District, telling them to let a pulse of water through the dam on the Stanislaus.

It's unclear which federal fishery agency sent the letter? What the...? How many "federal fisheries agencies" do we need? Oh, but that's right, Democrats: there's nothing to cut in the vast federal bureaucracy. My bad.

But upon receipt, Jeff Shields, the manager of SSJID went rogue: “Whose water will be released down the Stanislaus River to satisfy the second pulse flow?” Not his, in other words.

It was the second such order in the past three weeks. The SSJID complied with the first. According to the Manteca Bulletin, a local paper that has been covering the standoff, this flushed out 15,000 acre feet of water and 23 steelhead trout. But this latest order, which would reportedly use another 12,000 acre feet to save only six fish, was too much for Shields. (Fisheries agencies haven’t yet confirmed that count.)

The two water "pulses" represent nearly 10 billion gallons of water that the feds want to use to save a grand total of less than 30 fish, when instead it could be used to irrigate farmland, feed and water animals, as well as meet residential water needs.

So Lewis said no to the Bureau, and then secured legal counsel. “We tried to work with the Bureau for the last several years. We’ve sent dozens of letters and ideas about how to manage the river more prudently and other issues that we felt needed to be addressed because they were affecting our water,” Shields told the Manteca Bulletin. “I understand that they’re busy and they have a river that they have to manage and water that they have to take care of, but we’re busy as well—we have water that we have to manage and people that we have to look out for as well.” According to Shields, this water is better used on human interests, like agriculture and homes.

These eco-Marxists are completely insane. Off their rockers.

The entire federal bureaucracy (I'm not including our defense and intel budgets) needs to be slashed by 75 percent. For starters.

" Oh, but that's right, Democrats: there's nothing to cut in the vast federal bureaucracy."

Hate to break the news, but the Republicans are on board the Statist express as well!

Largely agree, but at least we have a few sane Republicans like Ted Cruz.

Democrats are trying to kill their own voters.

"directorblue said...Largely agree, but at least we have a few sane Republicans like Ted Cruz."

Not eligible, born in Canada not America.

Google "Is Ted Cruz elibigle" and read away.

His Mom was a U.S. citizen, therefore he is eligible. Period.