PAIN: How the 20-year old stock market bubble will end

Excellent article by Jesse Colombo at Forbes describing the lingering effects of zero-interest rate monetary policy (ZIRP) and other brainstorms of our benificent central planners. Some of the lowlights: 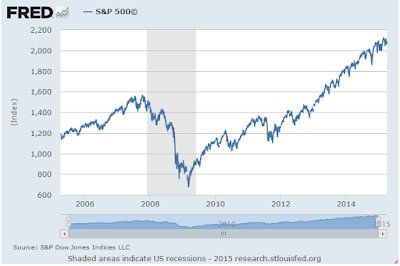 Six years after the Global Financial Crisis, the U.S. stock market continues to soar to new heights with nary a pullback or correction. In this piece, I will explain why the stock market is experiencing a new bubble that is actually another wave of the bubble that has existed since the mid-1990s.

A two-decade old bubble? Yes, you’ve read that correctly. Most people will consider this assertion preposterous, but the facts don’t lie. Though the U.S. stock market has been experiencing a bubble for two decades, it will not last forever. I believe that the ultimate popping of this bubble will have terrifying consequences for both investors and the global economy that is tied so closely to the stock market.

The SP500 stock index has more than tripled since its low in 2009, but that doesn’t mean that we are out of the woods. On the contrary, this is the calm before the storm.

...The incessant push to inflate our economy and financial markets has created an unprecedented situation in which stocks have been trading at overvalued levels for a record length of time. Nearly every stock market valuation indicator is giving the same reading: stocks are currently at levels that preceded other major historic busts.

For example, look at the Cyclically Adjusted P/E Ratio (CAPE), or the price-to-earnings ratio based on average inflation-adjusted earnings from the previous 10 years. The 1929 Stock Market Crash and 1970s stagnation occurred after the CAPE rose over 20 – a level that indicates stock market overvaluation. Incredibly, the CAPE has remained over 20 for much of the past two decades, aside from a few short months during the Global Financial Crisis. Without constant Fed intervention, there is no doubt that the U.S. stock market would have corrected violently like it has in the past... 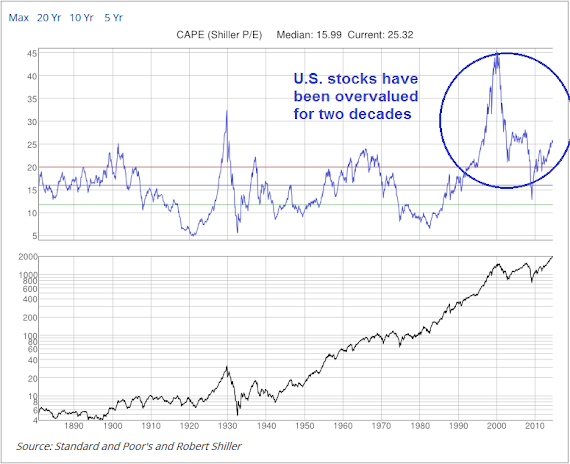 ...The key takeaway is that overvalued financial markets are not sustainable and must eventually experience a correction that returns them back to their fundamental value. In a free market (unlike what we have now), stock valuations move in waves, alternating from undervaluation to fair valuation to overvaluation, and back again. The Federal Reserve, by trying to keep the bubble constantly inflated, has distorted this natural process. Regardless, U.S. stocks will come back to earth when the Fed finally loses control of the situation, and the final comedown will be far more painful than would occur in a free market...

...How has the Fed kept the stock market inflated for so long? One way is by steadily cutting its benchmark Fed Funds Rate to an all-time low and holding it there for an unprecedented length of time. Interest rates have been falling since the early-1980s, and their low levels in the past two decades have helped to buoy stock valuations. Low interest rates fuel asset bubbles because it makes saving (or holding cash) less attractive than investing in riskier assets like stocks that are rising at a rapid rate... 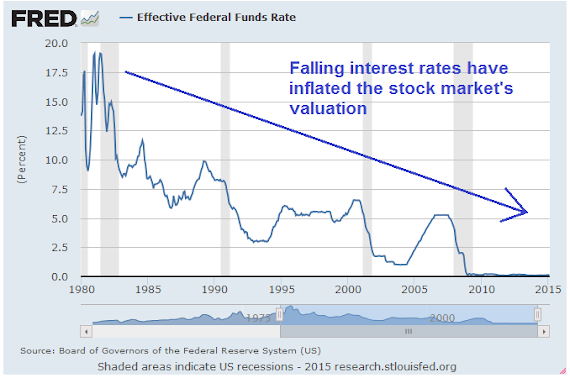 ...Record low interest rates have also encouraged speculators to borrow on margin to buy stocks, as they have during the last two bubbles, and before the 1929 Stock Market Crash. The heavy use of margin has helped to keep stock valuations inflated for the past two decades... 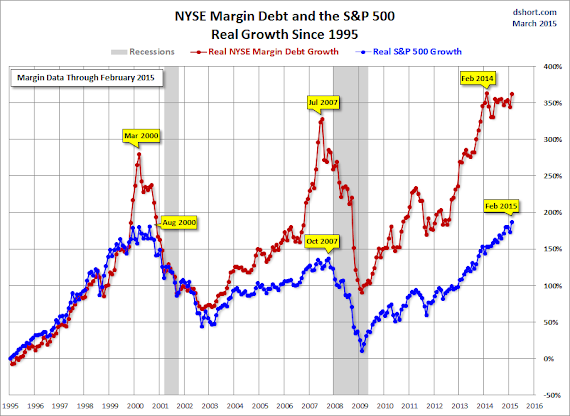 ...After the Financial Crisis, the Fed became increasingly desperate to re-inflate the bubble that was trying to fall on its own weight, so it took steps that it didn’t take during the late-1990s and mid-2000s bubbles: it resorted to outright money printing to pump liquidity into the economy and financial markets. As the chart below shows, the Fed created nearly $4 trillion worth of new money via its quantitative easing programs. Each QE injection led to a corresponding surge in stock prices... 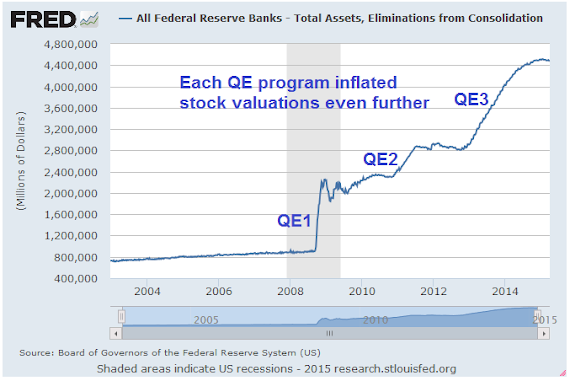 ...While the Fed is in control of the stock bubble for now, this won’t always be the case. Stock valuations and prices must come back to reality, and when they do, it’s going to shake the entire global financial system to its core. Because of the high ownership of stocks in our country, the two decade-old stock bubble means that American wealth itself has been in a bubble...

And just how will the bubble burst? Colombo speculates one of two things will happen:

I believe that the longer-term U.S. stock bubble will end when the very fuel behind it is removed, which is record low interest rates. As I discussed in my last stock bubble report, I foresee two ways that rates will rise and pop the stock bubble:

Scenario #1: After several more years of the Bubblecovery or bubble-driven economic recovery, the Federal Reserve has a “Mission Accomplished” moment and eventually increases the Fed Funds rate too high, creating a hard landing that pops the post-2009 bubbles that were created by stimulative monetary conditions in the first place. Rising interest rates are what ended the 2003-2007 bubble, which led to the Global Financial Crisis.

This digest is just that: a small sample of the compelling argument made by Colombo. It's worth reviewing the whole thing.

I read somewhere that the stock market was being shored up/supported by the Fed and its (dollar printing and interest rate regulating) policies (possibly by the IMF too).

The institution of Sharia compliant banking plus Obama's idiotic obscene spending and other policies that limit/squelch/kill business, and reward not working/benefits for illegals, etc. are not going to give anyone a soft landing.

These policies are guaranteed to create chaos.

Our politicians and money people are either insane...or evil.

(continued)
In fact, the 2008 'financial crisis' and the housing bubble were POLITICIAN CREATED/MAN-MADE and Politician augmented crises in which cronies were shielded and the average taxpaying homeowner was made to suffer.

Washington DC, the District of Corruption, is going to create a great deal more misery and cronyism/oligarchy before it's over.