THANKS, OBAMA AND HILLARY: 'Genocide' charged as up to 700 drown while trying to flee Libya

And 'Genocide' is the word CNN uses: 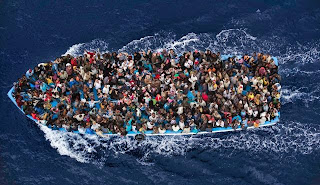 It was the latest in a series of dangerous voyages as hundreds of men, women and children boarded a boat in Libya, hoping to make it safely to Europe.

But after a couple of days at sea, in the dark of night Saturday, the ship was in distress in the Mediterranean and sent out an SOS.

As rescuers approached, the migrants -- perhaps 700 people on board -- moved to one side of their boat, hoping to be saved. Their movement caused the large, multilevel boat to capsize, sending the desperate crowd plunging into the frigid water, their chance of survival slim.

According to Maltese authorities, who are working with Italian rescuers, only around 50 of the 700 have been saved.

Barack Obama and Hillary Clinton were directly behind the destabilization of Libya. Hillary Clinton "falsely claimed Libyan leader Muammar Gaddafi was planning genocidal attacks against his domestic enemies" in order to justify attacks by a US-led NATO coalition.

Obama went so far as to proclaim the death of the dictator a 'foreign policy success'.

[Libya] is now in complete political anarchy, with a destroyed economy and a war torn society.

Presently, we cannot call Libya a State for after US/NATO armed intervention and regime change, practically all Libyan villages, from North to South, are now run by the various tribes that was once united under Gaddafi. Libya is in the state of civil war showing the inevitability of what Hobbes called “the ugly, brutish, nasty and chaotic state of nature” characterizing political anarchy. In this post-Gaddafi Libya, the anarchic and lawless militias are wrecking havoc in different parts of the country—each fighting each other for supremacy. The so-called “Islamist” Jemaa-Islamiyya and ISIS forces are busy carving out their own respective territories in the once secular and progressive socialist Libya.

Libya is now a stateless anarchy since various tribes and militias are declaring their own sort-of states in various parts of the country...

This was yet another instance of Obama bypassing Congress, claiming military action against Libya did not require Congressional approval. The New York Times went so far as to call Obama's actions "an illegal war" as the president violated the War Powers Act.

It has now been over three months since the first NATO bombs fell on Libya, yet President Obama has failed to request Congressional approval for military action, as required by the War Powers Act of 1973. The legal machinations Mr. Obama has used to justify war without Congressional consent set a troubling precedent that could allow future administrations to wage war at their convenience — free of legislative checks and balances.

To paraphrase Matthew Vadum, Obama put out the contract and Hillary carried out the hit, with the result being a burgeoning western arm of the ISIS caliphate and an ongoing humanitarian catastrophe.

Obama and Hillary own this disaster.

Not only do these 2 scumbags have absolutely not a whit of regret but they will totally skate.

If you want to get to a beautiful, if only, try this-If only Mark Levin were one of the debate moderators and asked Hillary about this.
MM