IRAN ANNOUNCES OBAMA WILL BE LIFTING NUKE SANCTIONS IN JULY: "Whether Sen. Cotton Likes It or Not"

Our president has emboldened the Iranians so much that they feel comfortable telling Americans sanctions will be lifted in July while at the same time informing U.S. Senator Tom Cotton he will basically have nothing to say about it. 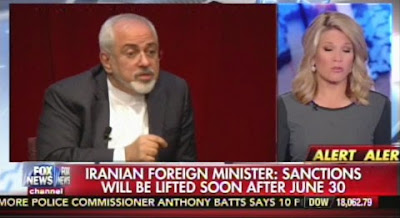 President Obama is allowing Iran to become a superpower in the region. He has abandoned our allies and has embraced Iran for a terrible deal. While Mr. Obama won’t sit down or try to work with the Republican Congress, he will sit down with Iran and give them more power than he gives Congress.

Foreign Minister Mohammad Javad Zarif blasted Sen. Tom Cotton in a speech today. He said there will be a relief of sanctions in July, “whether Sen. Cotton likes it or not.

Zarif is the head of the negotiations and he obviously believes all sanctions will be lifted immediately in accordance with his agreement.

Anyone who thinks Mr. Obama isn’t trying to establish a one-party system, needs to look at how he treats Congress and consider his other policies such as open borders.

The congress is letting Americans down at every turn. Sen. Ron Johnson put in an amendment to the Corker bill which would require a final Iran deal to be submitted to the Senate as a treaty.

The Senate voted 57-39 to reject the measure. They have every intention of approving the Iran deal no matter how bad it is. It is obviously a treaty.

In case you didn’t see these tweets, we are literally in bed with the enemy.

This is more of Obama fairy land foreign policy.