THE MONROE DOCTRINE IS DEAD: Obama apologizes for all U.S. "meddling" in Latin America since... 1823

The Monroe Doctrine is dead. This key U.S. foreign policy, in place since 1823, made clear that foreign efforts to assert control over Latin or South America would be viewed as acts of aggression. 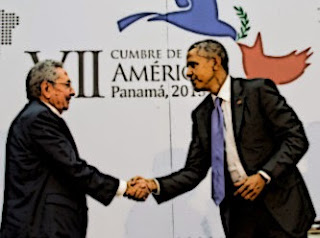 Obama meets with genocidal dictator Raul Castro, the first U.S. President to meet with Cuba's leader since the Communist Revolution.
No more stark example exists of the Monroe Doctrine than the Cuban Missile Crisis of 1962, possibly the closest the world has come to global nuclear war.

It was then that the iconic Democrat President John F. Kennedy "cited the Monroe Doctrine as a basis for America's 'eyeball-to-eyeball' confrontation with the Soviet Union that had embarked on a campaign to install ballistic missiles on Cuban soil."

President Obama officially closed a chapter in U.S. history that has guided presidents since nearly beginning, indicating the United States will no longer act to resist overseas influence in the Hemisphere.

Obama, who spoke Friday during a “civil society” forum in Panama City, Panama, disparaged past efforts by the United States to forestall the spread of Communism in Latin America and suggested similar missions would no longer be undertaken.

“The days in which our agenda in this hemisphere so often presumed that the United States could meddle with impunity, those days are past,” Obama said.

The U.S. being, of course, the country that he "leads".

Also noteworthy: Mr. Obama announced that he is giving Cuba a free pass on its support for terrorism and Communist insurgencies around the world.

Oh, how I yearn for an American president.

Any American as President?

Why fight to defend that which you want to fundamentally transform anyway?

Isn't there 1 General SOMEWHERE that has his hair on fire?
MM

I think Obama is an incompetent disgrace, elevated WAY above his feeble capability to lead the country.

But - even a retarded blind squirrel can find a nut occasionally - and I fully support normalizing relations with Cuba.

So - I will applaud this step by the idiot.