The pathetic Establishment crackpot known as John McCain -- don't call him the Godfather of ISIS, he's just the step-uncle -- is screeching about Ted Cruz again. And, as usual, he has things almost completely wrong. 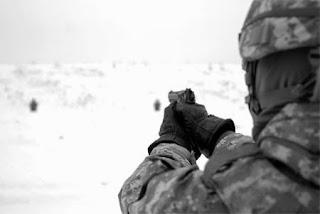 McCain, the Arizona senator who once called Cruz a "whacko bird," said the Texas senator running for president never pressed him to hold hearings about whether soldiers should be allowed to carry a personal firearm on military bases -- a claim Cruz made Sunday at a campaign stop in New Hampshire.

"You know, I was fascinated to hear that because I haven't heard a thing about it from him. Nor has my staff heard from his staff. Where did that come from? I have not a clue," McCain, who chairs the Armed Services Committee, told reporters Monday, according to The Hill.

He added that he would be "glad to discuss the issue" with Cruz to see if there should be a hearing.

But Cruz's assertion Sunday that he has been "pressing" McCain for a hearing came as a "complete surprise" to the Arizona senator and one-time GOP presidential nominee.

Thanks to a stunning new innovation called Google, we discover this Military.com article from 2014:

The issue of letting more troops carry concealed weapons came up during an April 8 hearing of the Senate Armed Services Committee when Sen. Ted Cruz, R-Texas, asked Army Chief of Staff Gen. Raymond Odierno about it.

“There’s some soldiers who feel quite strongly that concealed carry would be a sensible change in policies,” Cruz said. “There are others who may disagree. I guess my question would be, it has been a long time since this committee has held a hearing examining that question — examining the policy benefits and detriments of allowing concealed carry on military bases. In your view, would that be a productive topic for a hearing for this committee?”

In other words, Cruz lobbied the old chairman of the House Armed Services Committee, not the newly installed one, to consider revamping the rules for firearms on military bases.

Now for CNN and the rest of the establishment media goons, this kerfuffle is a scandal but Hillary's felonious email deletions and her pay-for-play foreign donations aren't.

Which tells you pretty much everything about the current state of "journalism".