THIS IS A PICTURE OF JUDGE BARBARA KLUKA: Make Her Name a Household Word

Those who have high blood pressure should not read this piece by David French, in which he describes the criminal abuse of the Wisconsin legal system by partisan Democrats aided and abetted by a scumbag in judge's robes. 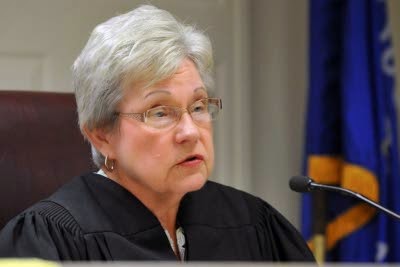 In the second John Doe, Chisholm had no real evidence of wrongdoing. Yes, conservative groups were active in issue advocacy, but issue advocacy was protected by the First Amendment and did not violate relevant campaign laws. Nonetheless, Chisholm persuaded prosecutors in four other counties to launch their own John Does, with Judge Kluka overseeing all of them.

Empowered by a rubber-stamp judge, partisan investigators ran amok. They subpoenaed and obtained (without the conservative targets’ knowledge) massive amounts of electronic data, including virtually all the targets’ personal e-mails and other electronic messages from outside e-mail vendors and communications companies.

The investigations exploded into the open with a coordinated series of raids on October 3, 2013. These were home invasions, including those described above. Chisholm’s office refused to comment on the raid tactics (or any other aspect of the John Doe investigations), but witness accounts regarding the two John Doe investigations are remarkably similar: early-morning intrusions, police rushing through the house, and stern commands to remain silent and tell no one about what had occurred.

At the same time, the Wisconsin Club for Growth and other conservative organizations received broad subpoenas requiring them to turn over virtually all business records, including “donor information, correspondence with their associates, and all financial information.” The subpoenas also contained dire warnings about disclosure of their existence, threatening contempt of court if the targets spoke publicly.

For select conservative families across five counties, this was the terrifying moment — the moment they felt at the mercy of a truly malevolent state.

Godwin's Law be damned: Barbara Kluka would have thrived as a judge in Nazi Germany. She should be sanctioned and subjected to every criminal charge imaginable. Judges are supposed to uphold the law, not rubberstamp the criminal suppression of political opponents.

If you haven't bothered to read the article yet, please do so. You need to know how low the modern Democrat Party will stoop and right now it's pretty damn low indeed.

in Georgia, the Democrats will file false affidavits and garnish Republican candidate campaign funds. Federal Judge allows them to get away with it so it will probably be tried elsewhere.

Lawless piece of trash, she needs to be dismissed immediately.....and take that lawless Chisholm with her.....put those two in jail, that should go over very well for the bubbas......

Why are the progs, libs, dems/commies always mug-ugly and mean looking?
Servants of Darkness?
Minions----here to destroy?

This woman needs to lose her law license...She is corrupt and dishonest. Typical Liberal socialist/sociopath.

Why do you idiot conservatives always compare things like this to Nazis? You complete morons, you're fighting Leftists. You're so indoctrinated by the media and the system that's doing this to you.

@Sophie What part of "National Socialist" do you not understand?

She will pay for her crimes soon enough. I'd suggest heading to Eric Holders bunker. He's also a wanted man.

That is alot of corruption for one judge...

Barbara Kluka should be removed.