Funny, I didn't know there were any Catholic institutions allowed in Saudia Arabia. Yet, somehow, the creative genius of one Dowd-comma-Maureen makes the conceptual leap from the malevolent misogyny of Sharia law to... her downtrodden status as a female Catholic. 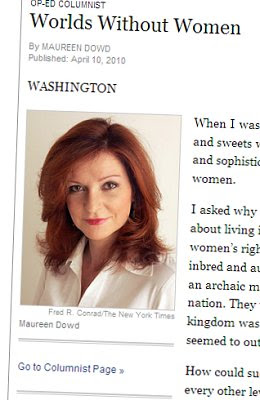 How could such spirited women [Saudi females], smart and successful on every other level, acquiesce in their own subordination?

I was puzzling over that one when it hit me: As a Catholic woman, I was doing the same thing.

I, too, belonged to an inbred and wealthy men’s club cloistered behind walls and disdaining modernity.

I, too, remained part of an autocratic society that repressed women and ignored their progress in the secular world.

Gee, Maureen, conflating your own petty misery with this: 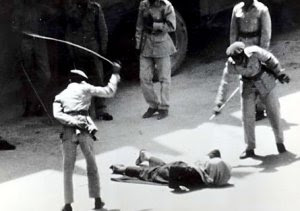 That's a woman receiving lashes for alleged adultery. Or this:

That's a woman who was stoned to death for alleged adultery. Or this:

That's a woman who was beheaded for... something. Must've been bad, though.

Truth be told, Mo, conflating your view of the Catholic Church and all of its painful and ugly scandals, with an endemic, sanctioned culture of brutality and misogyny seems a tad, well, stupid. Moronic, in fact.

It's amazing how none of these brave, bold Times columnists ever screw up enough courage to attack real religious extremism.

Here's hoping Pinchy moves MoDo behind a pay-wall again -- and soon. Her material is even more pathetic than the Bush-Cheney-Plame-Neocon column she ran for roughly 200 weeks in a row.

She's made her ignorance of central Catholic beliefs clear in her writing. So in my book she's not much of a Catholic woman. But yeah, how can she compare her "marginalization" to the sufferings of Islamic women? Just saw this at Jihad Watch. Pleeze.

Dowd gets on her knees to stroke the smooth-talking, bad-boy's magnificence because he is The Man who gives her right to infanticide.

It appears to me, Maureen Dowd is a radical Catholic extremist who has hijacked the Religion of the Sanctity of Life.

Will Moderate Catholics allow their faith to be hijacked by the radical extremists in their faith?

Are you saying the Times never covered the prejudices in Saudi Arabia? I am amazed at your silliness. It is pretty hard to judge how another person feels about mistreatment. Someone once said, "Injustice anywhere is a threat to justice everywhere." Suffering is suffering. But your reasoning is the reason for the recent election results. Young people just are not feeling your crazy thoughts. It is the reason why Pres. Obama did not win by over 9 million votes. And must we remind har "marginalize" American woman, white, black, native, of any race, creed, or color, has been treated here in America, and by Catholics.

Perhaps you could explain what just happened in Massachusetts, Virginia and New Jersey.

Perhaps you could explain why Americans, and young Americans specifically, feel so disillusioned by a President who had promised to govern in a bi-partisan spirit and instead drove a hammer through the heart of the economy?

Youth unemployment continues to rise, and it's worse for minority kids.

Prepare for the tidal wave in November. That's our Super Bowl.

MoDo is disgruntled. She seems to view Catholicism through the lens of her American political citizenship. Catholicism isn't a democracy, though, and if she doesn't can bring herself to make peace with that, there are other denominations that can accommodate her better. As jill notes, Dowd is not an exemplary Catholic - she doesn't know - or ignores - some very fundamental Catholic concepts, not the least of which is the role they play in the Church, and how they as women are valued.

So, she compares forced female mutilations, honor rapes, denial of the right to vote, drive, get an education or be seen in public without body coverings and a male relative escort to being a Catholic. That is not strecth, that is a totally dysfunctional brain at work.
And they have the nerve to call her pity me BS journalism.