'Brave, brave Sir Stupak ran away. Bravely ran away, away. When danger reared it's ugly head, he bravely turned his tail and fled.'

The Tea Party Express is celebrating the retirement of Bart Stupak. 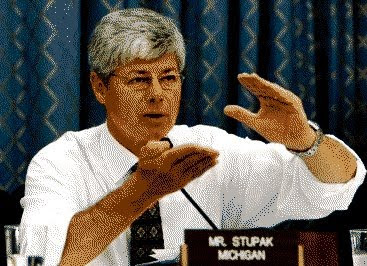 He was not in the least bit scared to be bribed
Or to have his fealty questioned, and his elbow twisted
To have his integrity jeered and his honesty burned away
And his veracity derided and mangled, Brave Sir Stupak.

Brave Sir Stupak ran away. Bravely ran away, away.
When a tough vote reared its ugly head, He bravely turned his tail and fled.
Yes Brave Sir Stupak turned about, He gallantly chickened out.

Bravely taking to his feet, He beat a very brave retreat.
Oh bravest of the brave, Sir Stupak.

I hear what cinched Stupak's decision was President Obama's promise to campaign for him.

Now watch him closely to see what he gets in return for his vote and his retirement. You know Obama rewards those who do his dirty work.

Stupak: "Hey, President Obama, now that I'm retiring, d'ya still have that Secretary of the Navy gig open? You DID promise it to me, y'know."

Obama: "Uh, umm, err, did I promise that to you? I sure don't remember that. Uh, well, take a seat in the waiting room with the other candidates and give your resume to my secretary. I'll get back with you as soon as I can."

I wonder how the last two elections have gone. Let's see....hmmm, silence. Now, leave Stupak alone. He represents a little known dstrict with nothing but hillbillies. I just laugh at you people. If Pres. Obama was so stupid, why/how did you guys lose to him?

I'm assuming that includes you as well....

I want to see what plum job he "retires" to in DC as part of the payoff he got for his vote for obamacare.

Retiring and guaranteed his buddies will pay for it. How much?

80% or so of his yearly income or more plus healthcare for life.

oooooh, I'm feeling bad for him already. Being paid over a hundred grand for destroying his nation.

Knights Who Say No said...

We are the Knights who say No! Go away or we will get rid of your silly healthcare plan for a second time!

According to Stupak the Tea Party had nothing to do with his decision. That's why he felt it necessary to make a snarky comment about making them spend a lot of money on him so they can't spend it on someone else. It normally takes a pound of TNT to get a career politician out of Washington on their own but he just, out of the blue mind you... decided to retire and spend time with his family because of all the traveling. I guess he didn't realize how much he traveled during eighteen years prior. What happened to Stupak will happen with almost every Democrat when they are seriously challenged. They show they have no real values they stand by regardless of the consequences because their whole party survives on levels of "grey", making constituents beholden to them, and deceiving stupid and/or uniformed voters. Their whole existence is based on buying the votes of their constituents and they can't understand it when their constituents can't be bought... like them.

Buck needs to enjoy his laughs while he can get them. (By the way, he sounds as much of an elitist snob as his hero, Obama. What's wrong with "hillbillies" and who is Buck to judge?) Obamacare is going down and it will drag the morally bankrupt majority down with it.