It's two, two, two Obama Campaigns in one!

The Obama Campaign On Solyndra, Two Weeks Ago: “Successful And Innovative.” OBAMA CAMPAIGN SPOKESWOMAN LIS SMITH: “In fact, both Republican and Democratic administrations advanced Solyndra’s application, and the company was widely praised as successful and innovative both before and after receiving the Department of Energy loan guarantee.” (David Shepardson, “Romney Targets Obama, Loan For Electric Vehicle Startup In New Ad,” The Detroit News, 7/18/12) 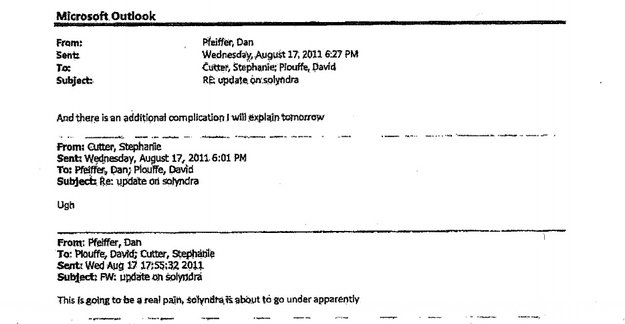 At least Solyndra's executives maintained plenty of respect for the taxpayers before the end...

Solyndra CEO Called the Federal Government the ‘Bank of Washington’

From today’s House Energy and Commerce Committee report on the Department of Energy’s Solyndra loan guarantee comes this startling revelation: Chris Gronet, the CEO of Solyndra, referred to the federal government as the “Bank of Washington,” adding, “it continues to help us.”

The report underscores the degree to which the Energy Department prioritized political considerations over economic ones when deciding to restructure Solyndra’s loan.

Here is a screenshot of the email: 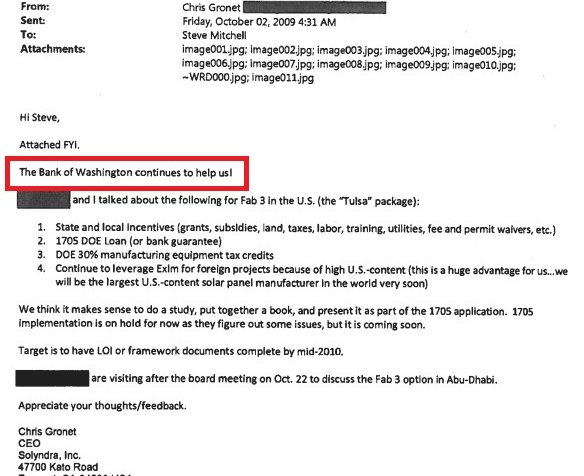 Solyndra Not Dealing With Toxic Waste At Milpitas Facility

MILPITAS (CBS 5) — Three months ago, CBS 5 caught Solyndra tossing millions of dollars worth of brand new glass tubes used to make solar panels. Now the bankrupt solar firm, once touted as a symbol of green technology, may be trying to abandon toxic waste... 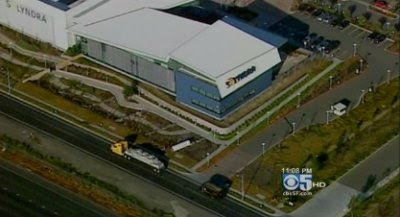 ...Solyndra leased a building on California Circle for the final assembly of its solar panels. But the cleanup at the leased building in Milpitas is in limbo, because Solyndra doesn’t want to pay.

CBS 5 found the building locked up, with no one around. At the back, a hazardous storage area was found. There were discarded buckets half filled with liquids and barrels labeled “hazardous waste.”

The building’s owner, a company called iStar, claimed in court documents, “there may be serious environmental, health and safety issues” at the premises. According to the documents, they include, “numerous containers of solvents and chemicals…and processing equipment contaminated with lead.”