When is wearing a $990 shirt evidence of being "out of touch", but sporting a $6,800 jacket is deserving of praise?

It's a trick question. When you're a member of vintage media, of course!

Back in May, Ann Romney, wife of Republican Presidential candidate Mitt Romney, wore a $990 Reed Krakoff silk shirt for a media appearance. The item of clothing set off a media firestorm, with the Romneys widely accused of being “out of touch” with average Americans.

In particular, the Washington Post wrote that the $990 blouse “will not help her husband change those perceptions, no matter how many Laundromat photo ops are on the campaign’s itinerary.” 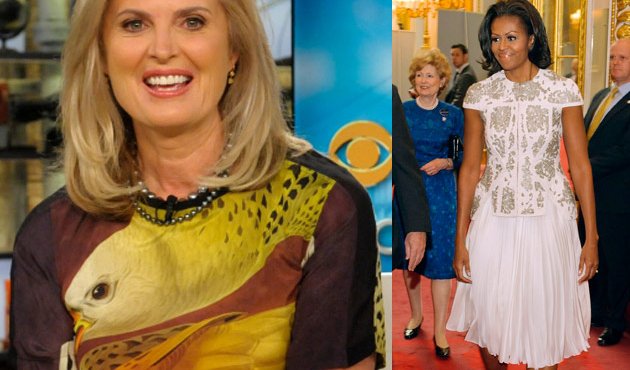 This time, the Washington Post simply described the intricacies of the jacket and noted that Mrs. Obama has previously been criticized for “not dressing up enough for Queen Elizabeth II, so she stepped up her game.” No snide remarks, no outrage over the cost, no suggestion she was “out of touch.”

Gee, WaPo hacks: last time I checked, the Romneys actually made their money working in the private sector, as opposed to living on the public dole.

Pray tell, Michelle's everyday wardrobe includes $1,000 handbags, $150 T-shirts and $540 sneakers (not to mention her "priceless" gowns, dresses, and other outfits).

Maybe one of you enterprising pro journalists could total up Michelle's wardrobe budget and ask a few questions about it. Or would that be too much work?

Not to mention that I'm 100% sure that Mrs. Romney buys her clothes with private money. Not so sure about Mrs. Obama.

That's an interesting $6,800 canvas. I wonder what sailboat she got it from...

What if I don't want either of these?
What if even a 900 dollar shirt is
absurd?
What if we NEVER EVER really get a real person in the White House?
Palin was SO real no one could stand it and now we play the Federal Reserve game all over again and pay out the ass.
I'll eat these words when Rmoney ends the Fed,,,,, never happen,, tool.