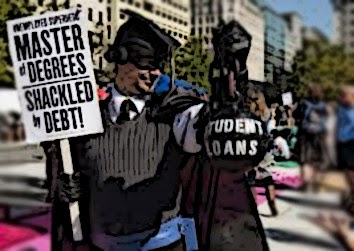 Before 2014, students had access to a plan that capped monthly loan payments at 15 percent of a student’s discretionary income—defined as “the adjusted gross income minus the federal poverty line that corresponds to your family size and the state in which you reside”—with any remaining balance being forgiven after 25 years, or 10 years for those working in “public service.”

Not content with that generous option, the Obama administration issued regulations last November that created the new Pay- As- You- Earn plan, which caps what students can be required to pay to just 10 percent of discretionary income. Under the new Pay- As- You- Earn program, loan forgiveness begins after just 20 years—not 25—and the 10- year forgiveness for government workers and those working in public service still applies.

The pending executive order will extend Pay- As- You- Earn to an additional 5 million borrowers. The option currently is open only to students who took out loans after 2007, but the White House will extend the option to all borrowers who meet income eligibility.

As the Wall Street Journal reported:

“The number of borrowers in the income-based repayment programs climbed 24 percent from January through March to 1.63 million, the Education Department recently said. The amount of debt covered by the programs grew 22 percent during that period to $88 billion—nearly a tenth of all outstanding federal student debt.”

Repayment caps such as those offered through income-based repayment and other policies put no downward pressure on college prices. After all, why should colleges reduce tuition rates if the government keeps increasing student-loan subsidies? Making income-based repayment options even more generous will continue to enable universities to raise tuition and fees, confident that students will have access to a deep well of federal loans and grants, which will be paid-off through IBR and loan forgiveness on the backs of the taxpayers.

Moreover, such subsidies shift the responsibility of paying for college from the student, who directly benefits from attending college, to the taxpayer.

Increases in tuition and fees at colleges over the past 30 years suggest that growth in federal subsidies such as loans and grants has done little to mitigate the college cost problem. Federal subsidies now account for 71 percent of all student aid. According to the College Board, over the past 10 years, the number of students borrowing through federal student loans increased by 69 percent.

If Congress is interested in reigning- in college costs, increasing federal loans and grants will never achieve that goal. But there are innovative proposals on the table that would.

Sen. Mike Lee, R-Utah, has introduced a proposal that would fundamentally restructure accreditation – a reform that could dramatically reduce college costs and increase access for students to innovative new higher education options.

Income-based repayment does nothing to incentivize colleges to keep costs in check. If anything, IBR should be repealed, not expanded through executive orders that bypass the normal legislative process.

This is just a waypoint on the road to total forgiveness of student debt.

I am currently working on paying off my SECOND degree, and the hassle of trying to pay extra and early is just outrageous. Any overage has to be followed up with numerous phone calls, and even then the money meant to be applied to the principal disappears into "future interest" payments.