It would appear that the father of Bowe Bergdahl, the AWOL/deserter swapped for five bloodthirsty terrorist leaders, has been in communication with member(s) of Al Qaeda. 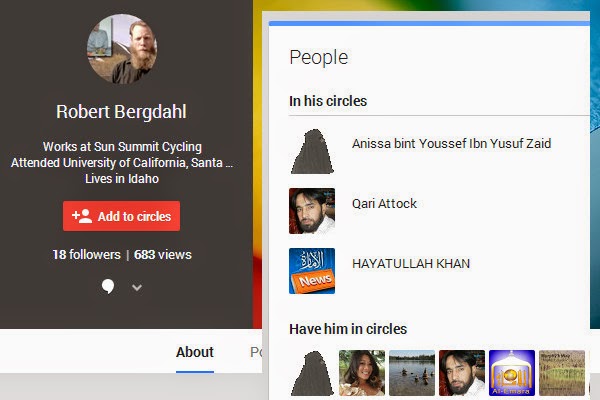 And just who is Anissa? From this link (translated), she would seem to be a 10-year member of an Al Qaeda technology support team.

I thank Allah (Subhana Wa'a Ta'laah) for guiding me on the path of truth, righteousness and justice, which is the Path of Jihad. Agradezdo my beloved brothers and sisters of the Scientific and Technological Committee of Al 'Qaida and TTP, as also to the various centers Translations of the Jihad, Al Al'Qaida General Command and the Taliban who have allowed me to develop and exhibit my work over 10 years.

There's a lot more going on with Robert Bergdahl than what's been marketed in the media. Remember the reason for his beard?

As for the beard, Robert Bergdahl grew it as a way to mark the time since his son was captured in 2009, and also as an attempt to curry favor with his son’s captors, according to the Post account. He studied Pashto, a national language of Afghanistan, in an effort to familiarize himself with the culture of the place where his son was a prisoner.

Based on Bergdahl's YouTube channel, however, there's more than meets the eye.

The age and history of these social networking accounts point to the fact that they are genuine.

From all appearances, the elder Bergdahl: (a) was in contact with a longstanding member of Al Qaeda; and (b) very well could have been a convert to Islam.

It's a pity the NSA -- with its massive surveillance program, unlawfully monitoring the conversations of every American citizen -- didn't let us know these salient details ahead of time.

As for Robert Bergdahl shaving his beard now that his son's been released, well, I wouldn't hold my breath.


Credit for discovering these connections goes to "Lady Liberty".

Anyone surprised? No one in this office

Thank you Doug for working with me to bring this story to light. The question now has to be asked, regardless of a fathers desire to get his son back, why would he have an individual, who by her own admission, "works" for Al Qaeda connected directly to his Social media account?

That`s an idea; has anyone searched thru the Snowden releases for any more on this case?