For years, the great nations of Europe spent huge sums of money to build their military might. They assembled themselves into blocs, all the better to play a dangerous game of power politics. Slowly, surely, they were stumbling toward war. 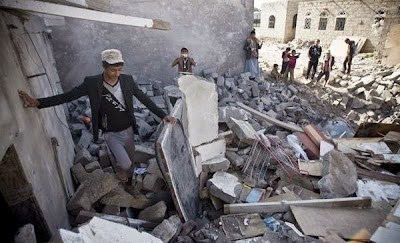 In June 1914, an assassin shot the heir to the throne of the Austro-Hungarian Empire, and the powder keg was lit. The results were disastrous.

The Middle East today looks frighteningly similar to the Europe of the early 20th Century.

For years, the Islamic Republic of Iran and the Kingdom of Saudi Arabia have competed—Iran, as the champion of the Shia Islamic world, the House of Saud as the de facto leader of the Sunni world.

Iran has a massive military, as well as major capabilities in unconventional warfare and espionage. It influences or outright controls Hezbollah in Lebanon, Assad in Syria, and the powerful Shia militias in Iraq. Now, Tehran is encouraging—and most likely aiding—the Al Houthis rebelling in Yemen.

The Saudis, powerful in their own right, have allied with al-Sisi in Egypt, King Abdullah in Jordan, and most of the other Gulf Arab states. They are also allied with the Pakistanis, who have one of the largest militaries in the world, and nuclear weapons to boot. Additionally, there is a growing possibility that the Turks may throw in with the Sunni side.

It’s a huge amount of fire power, rivalry and armed conflict concentrated in a comparatively small region. And this tinderbox could blow up into a major conflagration, with destructive consequences unparalleled since World War II.

But, some might say, these opposing blocs have been in place for decades, why the worry now? Quite simply, because America is no longer playing the role it has played in the region for a long, long time.

For decades, the U.S. served as security guarantor and diplomatic trouble-shooter for our friends in the region. The Saudis, Jordanians, Egyptians, and other friendlies didn’t have to worry that Iran would gain regional hegemony. They knew a strong, assertive America would keep Iran’s ambitions in check. Meanwhile, Iran and its proxies knew they could go only so far before being slowed and stopped by the judicious use of America power. The credible threat of American hard power was enough to keep our friends calm and our enemies quiet.

That has changed. Our enemies have seen the U.S. “lead from behind” in Libya, then turn its back on our consulate in Benghazi. They’ve seen us draw a “red line” in Syria, then walk away when Assad called our bluff. They’ve seen Russia annex Crimea and bolster the separatists in eastern Ukraine while America refuses to provide military aid to Kyiv. They’ve seen us flinch at the thought of putting American boots on the ground in the fight against ISIS.

Put it all together, and it’s a picture of an America that is timid, or confused, or flaccid—a nation that still talks a good hard-power game, but lacks the will to follow through.

Moreover, they see an administration so hungry for a “legacy” deal with Iran, that the Iranians’ considerable negotiating skills are not even being taxed. In the G5+1 talks in Lausanne Secretary of State John Kerry has made concession after concession with no quid pro quo from Iran—to the point that France is now emerging as the hardliner on our side of the negotiating table.

Our enemies aren’t the only ones who notice these developments. Our friends do, too. What must the Saudis and the others think when they see the administration cast aside regional ally No. 1—Israel? Can their “push out the door” be far off if they get in the way of the administration’s single-minded drive to appease the Iranian regime?

Those friends now have reason to fear that the nuclear negotiations with Iran will accelerate the U.S. withdrawal from the region or—even worse—produce an Iranian-American rapprochement at their expense. It is this fear that has led our friends to band together to defend themselves against what they know to be a growing threat: Iran. While the Obama administration may be willing to turn a blind eye to this threat in its pursuit of a nuclear deal, Iran’s neighbors do not have that luxury.

Since the U.S. has cut back on dispensing its usual antibiotics, our jittery friends in the Middle East now feel that they must counter—strongly and immediately—the local infections promoted and exploited by Iran. And they are sometimes doing so without consulting the U.S.

The result is a Middle East more explosive and unpredictable than ever. The conditions are now ripe for a major Middle Eastern war—one that could spill across the globe, wherever Sunni and Shia Muslims interact. All that remains missing is a spark.

Impossible you say? That June day in Sarajevo, no experts predicted the horrifying consequences of Garo Princip’s actions.

Today, the Saudis are massing 150,000 troops on the border with Yemen. The Pakistanis and the Egyptians have promised ground troops. These Sunnis governments view their alliance as one of self-defense. But it’s a huge threat to Iran’s desires for hegemony, and Tehran may even view it as a threat to the survival of the mullahs’ regime.

No one wants war, big or little. But among the power blocs of the Middle East, Washington’s misbegotten policies have fueled uncertainty on one side and perceived opportunity on the other.

In the aftermath of the Second World War, Americans have always dreaded a clash of the superpowers. But the lesson of the First World War is that when large regional powers—especially those driven by sectarian and apocalyptic forces—are poised to fight, any miscalculation can be equally cataclysmic.

That situation exists today in the Middle East. And the administration, far from easing the tensions, is actively destabilizing the region through its dealings with Iran.

this is what happens when you elect a community organizer and his slum lord buddy from Chicago to the most important office in the land.

This is what happens when you elect a community organizer and his Iranian sleeper agent buddy from Chicago to the most important office in the land.

Tempting to just let them kill each other if they could do it without bringing us into it. Saw another article about the 10 most dangerous countries and surprise--they're all in the "Muslim world". http://intelcenter.com/maps/cti.html

How 'bout 'Thanks 2x Obama voters'

History not going to be treating his enablers too well...

If the committee were honest, Obama's Nobel Peace Prize would be reclaimed and melted down.

No, I don't think so. None of the regional powers have either traditions or doctrines built on European "decisive battle" concepts, nor are they precariously perched on unstable mobilization schedules which demand full commitment to strategic annihilation.

Both "coalitions" are partially locked in draining proxy battles, which while they've not committed conventional main battle formations, have soaked up significant unconventional formations and vast amounts of treasure and manpower.

Likewise, the conventional combat forces of all concerned are untested and probably fragile, possibly unusable in open-field battle. The Iranian conventional military is probably culturally better positioned for open warfare, but it is also committed to a degree which the Saudis and Egyptians and their Gulf allies simply are not. In brief, the Arab militaries have only committed desultory air resources to current engagements, and their ground formations, while culturally crippled, are fully available.

In short, a decades-long repeat of the "long Sixties" era of brutal unconventional proxy warfare is far more likely than any sort of return to WWI-era mass attrition.

WWI had its unique set of circumstances which yielded its own devastating outcome that we still endure and suffer from today. What's going in the Middle East, while tragic, can not be interpreted as a
similar situation and therefore expect a similar
outcome like the EU powers. The ME is a complete
different world and it's a world where NO MATTER
WHAT we will not be welcomed to interviene in.
Their mentality is best explained by something I
heard there: "Me against my brother, my brother andI against my neighbor, my tribe against your tribe". Any western power interference, especially by us since they believe that everything bad that's going on there is our fault....and they're not too wrong about that, will eventually become a target. The 1st Bush didn't go into Iraq in '91 cause he understood that. He said it himself "a western country in charge of a middle eastern country would not be a good idea". Mr. Bucci is a warrior, his background says so, but I couldn't agree less with
such rethoric; that Obama is weak and that it's
preferable to get us involved by committing troops in the ME again. Oh no, he doesn't even say it but he sure as hell insinuates it, line after line. Why not come out and say it already? Do you think our armed forces are not smart enough to know that the Iraq war was a complete mess? That the reasons, which are never really discussed in public by those who got us there, including Mr Bucci's old boss: Donald Rumself, were dumb, rushed and irresponsible to the men and women who went there? I bled in that dirt, my brothers died there also and I remember it
all, especially the talks, how the zeroes used to
complain and describe that what we were doing was
just stupid. Obama is not sending troops in so
voluntarily like Bush did and I am glad for that, I am
glad to see the ME countries dealing with their own
$hit. If ISIS or the Houthies, or Al Shabad is defeated, it'll be a victory with nothing but an Arab face on it. If Iran comes out as a suer power in the region so be it. Once it gets big and threatening enough I'm sure that a new ME coalition will emerge to put it in check. Let them duke it out, our Security Forces (Spec ops, intelligent services, NSA, FBI, etc) will keep doing what they do best on the fringes and in the darkness. War can not be the rushed, punch first, develop an exit strategy later approach that America is now known for.

And it wasn't us who kept Iran in check, it was Saddam Hussein who did that but oh wait, we had the bright idea of getting rid of him because "we thought he was going to aid Al Qeda " and of course WMD s which may have not been a threat at all, at least not to us.