Could the entire Senate be on the verge of flipping?

Michael Barone thinks it's a possibility, now that Indiana's Evan Bayh has announced his "passion for serving the people" has "waned". 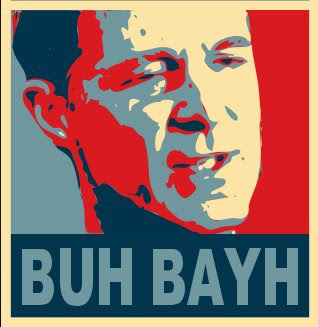 A quick search lists the following Democrats who have bailed out over the last couple of months in order to pursue "other interests" or "spend more time with their families".

Which presumably means they've found other ways to fleece taxpayers.


Update: "Yikes, this wasn’t very considerate, was it?: 'Bayh’s decision will set Dems scrambling for a replacement. The deadline to file to reach the ballot is Friday, meaning any Dem considering running for the seat must make a decision quickly.'"

at 1:29 PM
Email ThisBlogThis!Share to TwitterShare to FacebookShare to Pinterest
Labels: Crime, Democrats

Whoever wrote that is out of their tree. He was the favorite to win and was ahead by 20 points.[url=http://www.politico.com/news/stories/0210/32844.html[/url]

As well as being a vocal critic of Obama's policies. He's not for stealing anyone's $$.

And, no, I'm not a supporter of Bayh. Just educated on the issues.

Need to get some education prior to shooting oneself in the foot, poster.

Gee, chief, can I point you to the newfangled tool called "Google" which reveals the facts:

Using a DailyKos poll, by the way, is a little like employing a Magic Eight Ball, only without the entertainment value.