A History of Corruption in Chicago, Featuring Your Favorite Union Hacks, Trial Lawyers, Petty Bureaucrats and Democrats. But I Repeat Myself.

Nine researchers at the University of Chicago collaborated on a project that tracked corruption in Chicago politics for 140 years. The executive summary: 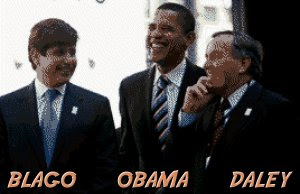 "...During the last several decades, Cook County has been a center of corruption with scandals emerging in many different units of county government... Public or political corruption occurs when government officials use their public office for private gain or benefit. In Cook County government this includes outright bribes as well as campaign contributions made by individuals or corporations in exchange for jobs, inflated contracts or political favors. It includes ghost payroll jobs in which individuals get a paycheck but do no work. With an annual budget of more than $3 billion—dishonest public servants find many different ways to profit illegally.

The purpose of this report is to summarize the many different forms of corruption and to recommend basic reforms that need to be enacted to clean up Cook County government..."

http://www.uic.edu/depts/pols/ChicagoPolitics/Anti-corruptionReportNumber3.pdf
Money quote: "The Cook County States’ Attorney likewise has a major role to play in curbing corruption in the county. For the last 30 years, the office has rooted out corruption only when Republicans have held the office. When Democrats have held the office they have most often whitewashed or overlooked the obvious problems."

Enjoyable read, especially if you live in Chicago and enjoy being screwed over and over again by the party of union thugs, anti-school choice proponents, trial lawyers and economic illiterates.

Oh, but they do it for the children.

Wow. This was produced by the University of Chicago? By _professors_ at that university??? And it found the _democrats_ guilty of corruption???

Well, it has to be glaringly obvious or they won't see it.

You know how that goes, scales falling from eyes, shiny newness wearing off, nekkid emperor, etc...

not quiet satisfied with the article. Needs more evidence.