Rasmussen Rates the Bounce in Popular Support for Obamacare Since Health Summit 'a Good, Solid B+'

Rasmussen has late-breaking details of the astounding 'bounce' in popular support for Democrat health care reform spurred, apparently, by the Obama Health Summit™. 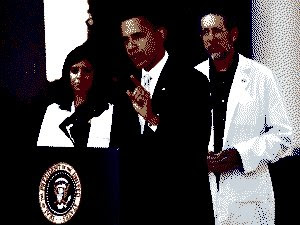 The first evidence on whether Barack Obama got a bounce from the health care summit comes from the overnight Rasmussen polling. The short answer: No. Or perhaps: au contraire. Rasmussen shows Obama’s strong approval at 22% and strong disapproval at 43%, for a net approval index—this is Rasmussen’s term—of minus 21. That matches the low recorded in Rasmusssen polling on December 21 (reported on December 22), as the Senate was preparing to pass its health care bill and Senate Majority Leader Harry Reid was in the process of delivering the Louisiana Purchase and the Cornhusker Kickback.

One night’s results are not overwhelming proof of anything, and the one-day downtick in Obama’s numbers is not statistically significant. But it’s interesting that his numbers fall when health care legislation leads the news. Not what White House strategists want to see.

Especially since Nancy Pelosi now claims that Democrats really never had a health care bill they were interested in passing: "No, I don't think -- there isn't a bill," said Pelosi. "When we have a bill, which we will in a matter of days, then that is the bill that we can sell. Our bill, the House and the Senate bill, had major differences which we are hoping now to reconcile. And then when we have a bill -- you -- as I say, you can bake the pie, you can sell the pie, but you have to have a pie to sell. And when we do we will take it out there."

From the pundits, on NPR's Diane Rehm Show yesterday, Newsweek's Eleanor Clift said that Democratic health proposals "never really turned into an actual bill. There have always been competing versions."

Gee, thanks for clearing that up. And it's always good to see state-run media working hand-in-hand with our beloved Democrat leaders.

Kinda reminds me of Venezuela in the springtime.

Yes, the next Senate might repeal ObamaCare with 51 votes, but Obama will veto that repeal legislation. the Senate and the House will then need a two-thirds majority to override the veto. That will not be possible.

ObamaCare must be stopped. Once the bureaucracy is in place, we are stuck with it.