Just got back from Big Lots while making my weekly Arugula and Wagu Beef run and they had a big stack of handsomely boxed limited run Obama commemorative plates for $2. They used to sell for $20+S&H on TV. Oh how the mighty have fallen. Even though they were placed on an endcap at the front of the store, it didn't look like they were moving.

Anyone want to wager this rather embarrassing remaindered stock vanishes very quickly due to an "anonymous" bulk buy?

The helpful commenters at AoS offered some intriguing potential "recycling opportunities" for the discounted plates. 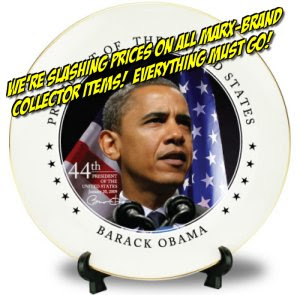 • Christmas presents for anyone who voted for Obama

• Indonesia bought them for the state dinner when he visits next month.

• Step 1: Buy 'em all up. Step 2: Donate to charity. Step 3: Write off as charitable deduction at pre-electile dysfunction price. Step 4: Profit (until notice received from IRS).

Via Larwyn and a whole bunch of crackhead, moron racists at AoS. Update: Visual aid.

at 9:27 PM
Email ThisBlogThis!Share to TwitterShare to FacebookShare to Pinterest
Labels: Democrats, Obama

Collectors are sifting through a sea of Barack Obama memorabilia searching for items that will be the gems of the future instead of tomorrow's junk, the Washington Post reports. Vast quantities of knick-knacks, ranging from dancing presidential dolls to Obama mints, have left even experts stumped about what to buy.
The rarest collectible is said to be an audio tape of Obama telling the truth. Although it is said to exist, as of yet no one has found this priceless treasure.