Dear SEIU Members: You Know Those Really Cool Pensions You Were Promised? You've Got a Better Chance of Getting Hit By a Meteorite Than Collecting 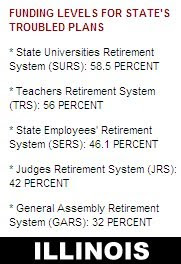 The mathematical impossibility of paying off the overly rich pensions of public sector employees is hitting home in state after state. The battle over dwindling financial resources will pit taxpayers against the unions; once the citizenry gets wind of the outrageous defined-benefit pension plans crafted by SEIU bosses, there will be no containing the rage.

• In California roughly 200,000 of the 235,000 state employees are unionized. In the last decade, pension payments by the state increased 2,000% with $3 billion paid out in 2009 alone. 15,000 retirees collect at least $100,000 a year. Many are former police officers, firefighters and prison guards who can retire at age 50 with pensions that pay 90% of final year's pay and are indexed for inflation. Given increasing lifespans, many of these retirees will collect payments for 40 or more years -- far longer than they worked for the state.

• In Illinois, more than 4,000 retirees receive in excess of $100,000 annually and nearly 15,000 collect more money than they ever did as state employees. The state's pension system is the most underfunded plan in the nation with a $50 billion shortfall. 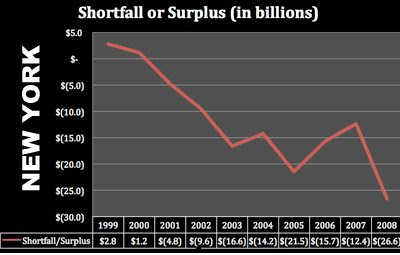 • In Massachusetts more than 100 retirees collect over $183,000 a year. State and local pensions are underfunded by an estimated $22 billion. And some workers continue to game the system. It appears that some local pension boards transferred workers to different jobs on their last day of employment in order to collect extra benefits.

• In New Jersey the Democrats in charge orchestrated a series of pension gaffes. In the 90's, when the economy was robust, the state legislature stopped contributing to the pension fund though $4.6 billion of benefits accrued. The state is also one of many that "kicked the can down the road" by selling bonds to pay for pension benefits. In 1997 New Jersey sold $2.75 billion of pension bonds which pay a fixed 7.64 interest rate; the fund, however, has only earned 4.8%, so the entire exercise cost the state an extra half a billion dollars. 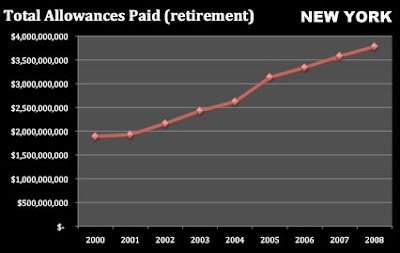 • In New York the teachers' pension fund lost $9 billion while ringing up increased costs; overall the teachers' system is underfunded by at least $15 billion. In the last decade, teachers' salaries rose 43% but their contributions to pension plans dropped from 18% of the total to 6%. Over the same time span, a state law was passed that allowed the highest-paid teachers to avoid contributing to their pensions entirely.

And this is just a small sample of the rot festering inside the public retirement plans. In total the U.S. public pension system is underfunded by more than $2 trillion.

....[the underfunding deficit] will increase pressure on many states’ strained finances and crimp economic growth, according to the chairman of New Jersey’s pension fund. The estimate by Orin Kramer will fuel investors’ concerns over the deteriorating financial health of US states after the recession. “State and local governments are correctly perceived to be in serious difficulty,” Mr Kramer told the Financial Times... “If you factor in the reality of these unfunded promises, their deficits will rise exponentially.”

Estimates of aggregate funding requirement of the US pension system have ranged between $400bn and $500bn, but Mr Kramer’s analysis concluded that public funds would need to find more than $2,000bn to meet future pension obligations.

It's high time that public-sector unions were outlawed and all such organizations currently operating disbanded. It's clear that they serve no useful purpose other than soaking taxpayers and their rank-and-file members.

How long do the non- working people expect the working taxpayers to continue to fund these programs? How can they not grasp the fact that those who are paying for these indecent immoral pensions will stop doing it when the government is taking 70% of their pay? We are ALL GOING TO QUIT.

Whattan awesome expose', amigo. And of course the beauty of our system of sovereign states is that, as taxes skyrocket to pay for benefits in these People's Paradises, the doomed taxpayer is actually free to GET THE HELL OUT AND MOVE TO SANITY LAND. Thereby leaving the union "beneficiaries" and their fat political benefactors alone to rip each other's throats out.

It's a beautiful future we are approaching, n'est ce-pas?

Here in California the obvious remedy would be an initiative banning public employee unions and their collective bargaining. We could reset the pension promises too.

However, I suspect that some Federal law would get in the way.

Reagons breaking of the ATC's union created the policy of defered larger pensions in exchange for lower general wages for Public employees. This was soon instilled in most public union contracts because of the short term gains to state budgets.
The need for this was created by reduced Public funds because of tax breaks to Corporations and wealthy individuals,the trickle down economics. Corporations and individuals did Not invest in local Jobs and took their money Overseas to developing markets, also with tax incentives. So over the past couple decades these debts and failed policies are becomming evident and the money pay for it is not there.
In some cases there are excessive pension packages that should be evaluated but the large majority are for the average Public worker, and are contractual earned over a worker's lifetime. Now What is your Real idea of how to SOLVE this issue legally?

Just be aware as you roast all the public sector employees out there that not all of us are union members and for some of us our pensions are funded by mandatory contributions that come directly out of our paychecks, but as you all drum up this hatred about how lazy, useless and greedy we all are, we will continue to serve the ungrateful public as we go about our jobs.