Leave it to the Muffington Compost to publish the most insipid 'analysis' this side of a Dan Rather 'expose'. In the wake of the announcement that Evan Bayh has had it with the hard left, the brilliant Sam 'Franken' Stein reveals the mystery of Democrat failures to pass legislation: They haven't talked enough at the American people.

...Some of the most prominent names in the Democratic Party's consulting class argued on Monday that by dropping the pretense of rhetorical moderation, lawmakers could lay the groundwork for a comeback.

See, the people really want Cap-and-Trade, Socialized Medicine and Forced Unionization in the form of "Card Check"... that's what they were demanding at all those town hall meetings! Plus: they really love being called tea-baggers!

In an e-mail to the Huffington Post, Robert Borosage, co-director of the progressive Campaign for America's Future, practically begged Obama to flex the White House's muscle.

"Take [the Republicans] on -- from the damn White House," he wrote in an e-mail to the Huffington Post... "The issues are innumerable. The choices clear," Borosage added. "We've got the bully pulpit. Let's use the damn thing." 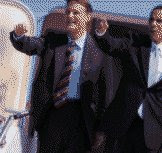 Precisely. Because the President is close to hitting five hundred speeches in little more than a year. If he can only get to a thousand...

Gee, Markos, even the Soros-funded commenters at Media Mutters are complaining about the number of Castro-like speeches by Dear Leader ("[it] makes me wonder when he finds time to actually work and provide leadership on legislative issues").

You'd think the "progressives" would rethink their agenda given crushing losses in Massachusetts, New Jersey and Virginia.

But that would require rational thought as opposed to ideology.

I can't wait for November.

at 7:41 PM
Email ThisBlogThis!Share to TwitterShare to FacebookShare to Pinterest
Labels: Democrats, Obama

You're really onto something. How about an "Obama-Channel"? That way he can spread the message, and spread the wealth, 24/7 ?!?! Brilliant, no? OH, and maybe a radio station, sort of an "Air America II " but with OBAMA either hosting live, or just tape recording of his speeches, 24/7. Maybe like North Korea, Congress could pass a law that everyone must have a radio in their family room, turned to the Obama-Channel 24/7. Wait, no, that'd be too obviously intrusive. Sorry

Stop and think about this. Hitler had the SA and the SS. Obama has the SEIU and ACORN. What's not to like there.
Also Hitler gave very stirring speeches, sort of like the won and knew about as much about what he was talking about as the won. You gotta love it.
Now, where'd I put my jackboots.

I agree that an all-Obama, all-the-time TV cable set-up and a talk-radio marathon of the Thoughts of a Cafe-au-Lait POTUS would absolutely catapult little o into that briar patch.

they haven't already 'dropped the pretense'?