In the wake of the flawless operation that ended the life of a Hamas mass murderer, the idiots of Israel's cringing class (on display today in the WSJ) are calling it a "botched job" and a "diplomatic nightmare" because the passports were forged, the hit squad was captured on Dubai's ubiquitous surveillance cameras and Britain's nose is bent slightly out of joint. Granted, things certainly would have turned out better if the people involved had used their real passports, worn dark sunglasses and big floppy hats, and hidden behind the palms in the hotel lobby. But alas, the brazen crew and the reckless organization that sent them were not that clever. 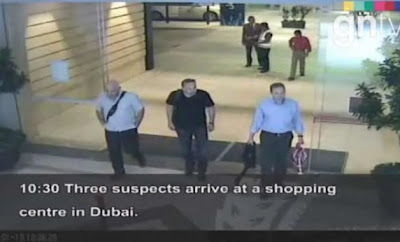 So far, the only ones in custody for this "crime" are two Palestinian members of Fatah, arch foe of Hamas. So naturally the finger of suspicion points to the Mossad. Interpol has put out an APB and the shocked, shocked authorities in Dubai are calling for the arrest of Mossad chief, Meir Dagan. (rotsa ruck.)

But amid this hubbub, aren't we all overlooking something that's staring us in the face? Before that piece of terrorist trash was found belly-up, for years he was passing through customs throughout the Arab world and beyond, no questions asked, no muss no fuss. It was nobody else's business until the Jews came for him and brought the maggot to justice without so much as a shot fired, a drop of blood spilled or a hotel room disturbed.

If the Israelis don’t come to grips with the implications of this little anecdote, then the fate that awaits them will be sad and richly deserved.

Related: The Dubai Hit Captured on CCTV: When you want to say goodbye, say it with bullets.

The team came in, in ones and twos, using fake passport that is good enough to pass the spot check by customs. They either have their equipment(s) either on them or procured in country. They gathered intel on the target and execute the plan, left the country, all in about a 48 hours' time. The only thing the others were left with were images of them and fake passports.

I bet some HAMAS and other groups on the Israelis' "naughty" list ain't gonna sleep too well for a while.

Yep. I was also wondering whether Iran was the target: leave your country and you're toast.