We're in the best of hands: consumer confidence down sharply in February, now at lowest level in 27 years

Who was it that said everything the Democrats touch turn to crap? Oh, yeah. That was me. Well, the Conference Board just confirmed it. 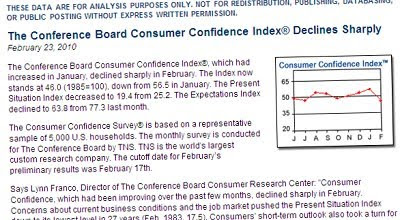 The Conference Board's Consumer Confidence Index® "declined sharply in February" to 46. Worries about job conditions and current business conditions pushed the "Present Situation Index" down to its lowest level in 27 years.

In a nutshell, it's another Obama record!

And, like a frustrated child, Obama keeps trying to shove a massive health care spending bill down the American people's throats even as the country is going broke with massive unfunded entitlement programs.

But remember, folks: he's not an ideologue.