Another day, another intifada at the University of California Irvine

On 8 February 2010, Israel's Ambassador to the United States, Michael Oren, gave a speech at Cal-Irvine. The school has a troubling history of tolerating and implicitly supporting hateful activities by Muslim extremists. It was no surprise, then, that Oren was heckled and interrupted repeatedly during the speech. 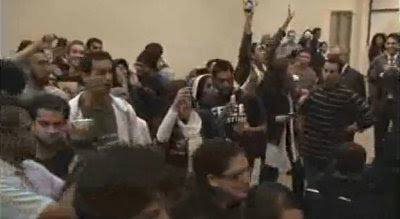 The ambassador persevered, however, and completed his speech once the anti-free speech crowd had been ejected and arrested.

Of the Cal-Irvine administration, Bruce Kesler asks, "where are the adults?"

The University of California campus at Irvine was the scene a few days ago of pro-Palestinian demonstrators interrupting the presentation by Israel’s Ambassador to the US, Michael Oren. Scott Johnson at PowerLine sums up the demonstrators’ core proposition: "The actions are based on the proposition that the defense of Israel in speech is beyond the bounds of civilized discourse just as the defense of Israel in deed is illegitimate because Israel is illegitimate." 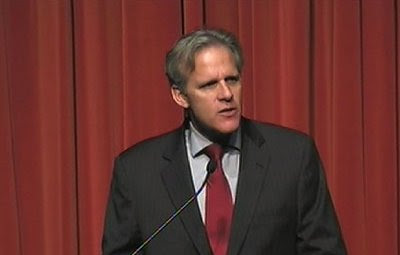 ...Max Boot, a graduate of "Berzerkley", wrote at Contentions, of this and similar campus attacks, “Anything short of expulsion, or at least suspension, would seem to be a wrist-slap that will only encourage more such misconduct in the future and make a mockery of the free speech that universities are supposed to champion.”

The San Diego Union-Tribune editorial read: “It was an embarrassing display of inhospitality [at Irvine]. It was also a wasted opportunity. The critics should have stayed and listened. As a U.S.-born scholar on the Middle East and a best-selling author with a Ph.D. from Princeton, Oren has much to say about one of the most important and interesting corners of the globe.”

By contrast, Ambassador Oren appeared at the University of California campus at San Diego a few days later... In sharp contrast, UCSD’s administration demonstrated resolve and determination to conduct a program in a peaceful and civilized manner and in the best traditions of the university’s commitment to freedom of speech and exchange of ideas. The presentation started with a strong statement from Peter Cowhey, Dean of the UC San Diego School of International Relations and Pacific Studies, that interruptions would not be tolerated during Ambassador Oren’s presentation and that members of the audience would have the opportunity to ask questions at the end of the presentation. The lecture proceeded smoothly..."

Though the Q&A was dominated by pro-Palestinian students, “Ambassador Oren responded to each question with the knowledge of the accomplished historian that he is and with the wisdom of a true diplomat.”

If you'd like to voice your displeasure for its continued support of lawlessness and discord, contact UC-Irvine's Chancellor Michael Drake and the California Board of Regents.

Obviously this is a misguided protest by enthusiastically dedicated American Patriots who wrongly assume that acting like 60+ year old right wing extremists(AKA senior citizens) at townhall meetings would be acceptable. Surely they are not likely to repeat this kind of behavior.

Aside from the fact that the town hall protesters were voicing discontent with their elected representatives who continuously defied their wishes...

...that the town hall folks are trying to get politicians to adhere to the Constitution, not topple it with Sharia law...

...and the town hallers believe in the civil society and freedom of speech, religion and equal opportunity as opposed to a barbaric form of 7th century jurisprudence that is at odds with all of Western Civilization...

Well, aside from all that, fishinagin, that's a really good analogy!

And to that, he compares those who want freedom to those who don't.

And there you have the nutty left in a nutshell.