By June the number of unemployed workers who have exhausted their benefits will hit five million. According to the Bureau of Labor Statistics, there are a record 6.31 million workers who have been unemployed 26 or more weeks. This represents 4.1% of the entire civilian workforce, the highest level since 1948.

Housing starts have fallen off the cliff. Builders were rushing to close home sales by June 30th to take advantage of the extended tax credit. But they expect Q3 to be extremely challenging since the credit will have expired. Housing starts often are a leading indicator for unemployment; but the continued softness in these numbers "suggest unemployment will stay elevated for some time."

What little housing activity that actually is occurring is funded by -- wait for it -- the taxpayers. In Elkhart, Indiana half of all mortgages use federal support, which encourage tiny down payments (e.g., 3.5%) and use a $7,500 tax credit for first-time buyers. In short, the same interventionist policies that helped melt the financial system down -- central-planning and wealth redistribution, Politburo-style -- rather than freeing the private sector to innovate, create and adapt to changing market conditions. 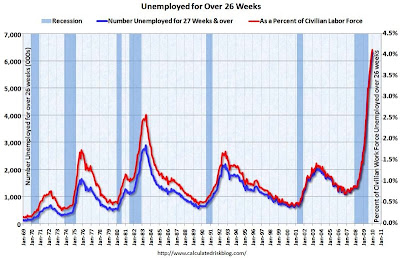 The White House was supposed to introduce a plan to revamp Fannie Mae and Freddie Mac this month with the introduction of its new budget. But it failed to do so, with little fanfare from the media. In fact, the Obama administration has been surprisingly mum about the GSE's even though it is dramatically "distorting the market", according to The New York Times. Denny Davis of Horizon Bank in Elkhart says that home buyers are actually purchasing homes to get $7,500 in cash as an emergency fund: "People are buying to get that tax credit, to get some reserve money. They’re saying, ‘If something happens, I will have a little bit of money to fall back on... That’s not healthy.”

In order to reduce retail vacancy rates, some cities have resorted to razing 'white elephant' malls. In Columbus, Ohio two empty malls were demolished, which took 1.1 million square feet of retail space off the market. As a result, the city's vacancy rate has dropped to 15.1% from 16.9%.

Effective March 31, the Fed is halting its purchase of mortgage-backed securities. Some experts believe that mortgage rates will jump a full 100 to 200 basis points, which would further damage the housing market.

All of these factors, however, pale in comparison to what will transpire at the end of the year. 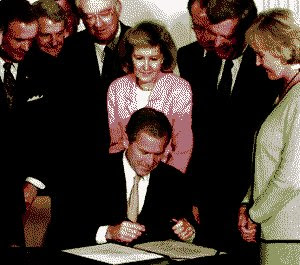 We "are about to experience the largest tax increase in history" as the evil Bush Tax Cuts expire. For the so-called wealthy (an individual or business owner grossing $200,000 a year or a couple making $250,000 or more), taxes will skyrocket. Capital gains taxes will rise; itemized deductions will be capped; and the estate tax will also return.

In other words, the government will take even more money out of the hands of business owners, entrepreneurs and the middle class at precisely the worst time. The economy is flat on its back and those who would invest, innovate and hire are instead having the life choked out of them by an out-of-control centralized government that is addicted to spending money it doesn't have.

Don't look for any of this news to impact Democrat policy-making, however. That would require the use of fact, logic and reason -- not strong suits for the current crop of Marxist ideologues who currently hold the reins of power.

I recently came across your blog and have been reading along. I thought I would leave my first comment. I don't know what to say except that I have enjoyed reading. Nice blog. I will keep visiting this blog very often.

Of the 5 million workers nationwide who may lose their unemployment benefits by June, the lion's share will likely be in California. Unemployment now stands at 12.1% there with a huge state population.

The National Employment Law Project's estimated this month that 855,000 Californians would could lose benefits by June unless additional federal extensions are granted.

Hm. So in 10 months, the tax rate will skyrocket, which means business owners will take every opportunity to cash in any profitable bits they can get sold. Which the Dems will claim as Economic Activity, possibly allowing them to remain in power. Until Jan 2011 when the rug gets pulled out and the Great Crash starts.