Dinosaur Media AWOL as Hundreds of Children Unearthed in Mass Grave, Executed by the Barbaric Regime of Saddam Hussein

Three mass graves were unearthed in the Dibuz neighborhood of Kirkuk last week. The graves contained hundreds of bodies of innocent children, who were executed by Saddam Hussein's genocidal regime.

Not one word from the legacy media on this story, which resembles something out of the annals of Nazi Germany's horrors. 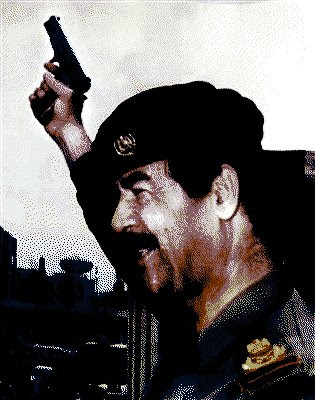 Three mass graves were discovered in the sub district of Dubiz in Kirkuk. Announced the Kurdish daily news paper ASO on Sunday, Feb.21st. These graves are to be excavated by the Ministry of Anfaled and Martyrs of Kurdistan regional government in a near future.

“The graves are holding remnants of children from both Chamchamal and Garmyan areas”. Sayd Fazil Amin the head of KRG martyrs office in Kirkuk told ASO, these kids were taken into captivity during 1988 Anfal campaign against the Kurds.

Anfal genocide was a campaign against the Kurds in 1980s. It was aimed at the elimination of the Kurds in Iraq, by destroying and burning Kurdish villages down. Killing and burying alive the people of these villages. It costed over 200,000 lives of innocent Kurds.

The media channels have not yet been invited to publish the unearthing of these three ‘out of hundreds of’ mass graves. We will soon invite the Arabic as well as other foreign media and officially announce the discovery, added Amin.

“We were jailed in a prison in Dubiz for a while. The only thing we knew then was that of, our crime was being a Kurd. In Dubiz they separated us into men, women and children” Bafraw, an Anfal survivor told Hawler Tribune, “Amanj, my 7 year old son, before taken away was very sick, I asked if I could go with him. They [soldiers] told me, do not worry we will put an end to his sickness, I know how they did it”

Kurds know all their beloved Anfaled ones are dead somewhere in the deserts of Iraq. All they are awaiting for is the return of their remnants. As said Bafraw “Ever since then I have been waiting for him”

A group of experts from ministry of Anfaled and Martyrs are to excavate these graves soon. The graves hold remnants of 272 children and the oldest one among them is a 16 year old girl. A pregnant woman is also among them, added Amin.

Will the U.K.'s "Iraq Inquiry" include this news?

Will President Obama claim this is just a cultural misunderstanding?

Will some of the legacy media outlets in this country begin to actually report the news before they finally slip into the abyss of bankruptcy?

"Will some of the legacy media outlets in this country begin to actually report the news before they finally slip into the abyss of bankruptcy?"

Never.I met a lot of these people, and they are virulent ideologues,products of J-school, well...brainwashing is how it is best described.

Like Obama jamming healthcare/govt control down our throat, such ideologues will 'take one for the team' in their lust for control.

From what I understand, the Media was on the take in Iraq, suppressing news to gain access to "exclusives."

But only the sort of exclusives that fit the narrative.

We're wasting time complaining about Obama and having tea parties. The Press has the power. . . still.

When Mr. Obama ran in the General Election, he was decidedly partisan in the most obvious fashion.

His choice of Biden for example, was a clear sign this had nothing to do with 'change'.

But most concerning, besides the vapid Collectivist mantra, was the undermining of the concept of fighting for freedom around the Globe.

Obama pushed a naive conception that the USA was the bad guy, and seems to have learned nothing from basic history - including why the Geneva Conventions were inspired.

It is truly sad, we have such misguided Political Frauds in powerful positions once again.

Team Obama's treatment of the Iranian Despots alone, is only inviting more folly.