It's another Obama record! The Evening Tribune of New York headline says it all.

...the Office of the State Comptroller recently issued a report on the sales tax collection for all counties in New York state in 2009 [and] compares 2009 to 2008 collections, and found a 5.9 decrease in collections statewide.

Sales tax-declines were experienced by 53 of the 57 counties in the report. Only four — Chatauqua, Oneida, Schuyler, and Seneca — counties experienced a growth in sales tax revenue, but the report attributes it to other factors other than economic growth, like late payments and other technical adjustments.

“Unlike other recent downturns, 2009 was the first time in recent history that there was actually a decline in county sales tax revenue — a sign of the severity of the recent recession,” the report reads. “The sales tax decline in 2009 was one of the worst on record.”

“This is yet another sign that the Great Recession is having a continuing impact on our communities across New York,” DiNapoli said in a release. “These numbers are sobering. Fortunately, many local governments have taken sometimes painful budgetary steps to stave off disaster. It’s a struggle, but all levels of government have to make every taxpayer dime count.”

The report didn’t offer much room for optimism, stating that tax collections are largely driven by two factors — personal income and employment... “Both of these factors are expected to remain weak in 2010,” the report reads. 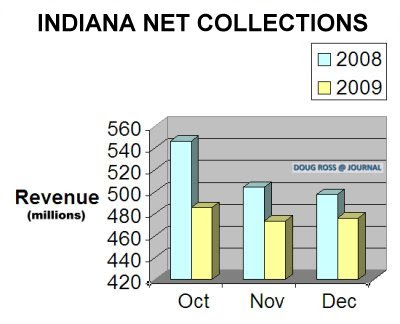 As do Texas' receipts. 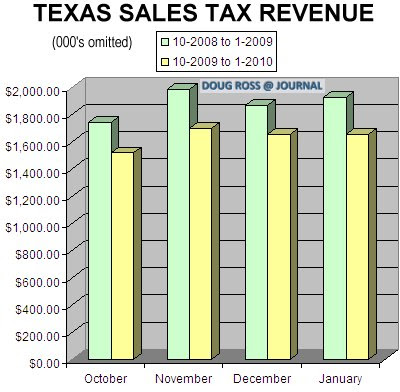 The entire economy is flat on its back, as businesses wait in terror to see what Democrats will do next. While the likes of Obama, Pelosi and Reid casually discuss nationalizing one-sixth of the economy, levying fees on all areas of production with the addition of VAT taxes, assimilating 401(k) plans, and levying massive new energy taxes in the form of "carbon cap-and-trade", individuals and businesses of every size are frozen, waiting to see how they'll be punished and tormented next.

This is the problem with having hard-core, leftist ideologues running the branches of government. Facts, logic and reason don't matter to them. Only the pursuit of more power over the electorate matters. And they will use any means necessary, including illegal legislative maneuvers, to accomplish their aims.

This is a really alarming situation. This implies that the economy is not getting any better despite what Obama and the rest are promising. We just hope that the taxes collected will be maximized.